On November 15, 1950, Ada DeBold, and her husband Harry, called the first meeting of the Committee for Nephrosis Research in a desperate attempt to save their child. Several months earlier, the couple's infant son was stricken with nephrosis, a little-known condition that had no real treatment. DeBold was determined to take positive action as she confronted the challenge of parenting a child with an incurable disease and due to her fortitude, the National Nephrosis Foundation (NNF) was born. The NNF was the inaugural lay group that ultimately became the National Kidney Foundation in 1964.

The DeBolds' son died at age four while nephrosis was still a death sentence but his mother's efforts to connect patients and doctors paid off just a few years later when a treatment was discovered that has since saved the lives of thousands. 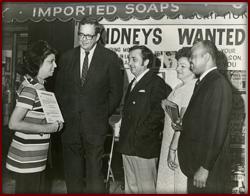 Throughout the 1950s, the Foundation's main focus was supporting kidney patients and their families. Ada DeBold continued her crusade to help those with all types of kidney disease by raising funds for research and patient services.

The organization sought to raise awareness about the dangers of kidney disease by developing and distributing information to the public. At the same time, a paper entitled "How to Form a Chapter" was distributed to interested individuals and groups around the country. The first major national fund raising campaign took place in 1956 and was a complete success, raising $400,000. The Foundation was quickly gaining national recognition as an important national health agency. 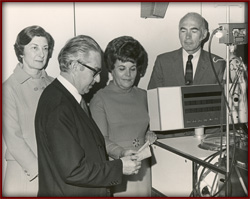 Everything changed in 1960 with a groundbreaking medical advance. The invention of the Teflon shunt made repeated access to a patient's blood possible. Kidney failure could then be treated with dialysis. Transplantation of kidneys from sibling donors was also proving to be very successful. Kidney failure was no longer considered a fatal illness, but a chronic disease—and helping patients with kidney failure through education, research and advocacy became the primary mission of the Foundation. The first NKF research fellowships were awarded in 1968.

The Foundation grew in scope and became a vocal advocate for federal support of wide-ranging kidney disease programs. In the 1960s NKF was instrumental in securing the first federal funds ever earmarked for kidney programs—specifically $6.4 million for a variety of initiatives to help kidney patients get the care they needed. The money was used to establish training centers for the education of doctors and nurses in the treatment of patients with kidney failure; for professional and public education, including screening programs; research into the cause and nature of kidney diseases; and the development of more effective dialysis equipment.

That primary focus on service for dialysis and transplant patients lasted for more than 20 years. It included a milestone achievement in 1972-- the passage of legislation that provided federal government financing for nearly all Americans with kidney failure. This law established an End Stage Renal Disease (ESRD) benefit within Medicare, the federal program that covers medical care for the elderly and disabled. It was, and continues to be, the only categorical coverage for any disease in the United States. This federal program marked the beginning of an ongoing government relations component to the Foundation's service and research mission.

Throughout the 1970s and 1980s, a stronger emphasis on encouraging organ donation and raising public awareness became important roles played by the organization. NKF developed a large library of published material for a wide variety of audiences, and positioned itself as the source for information and support on numerous issues related to kidney disease, especially dialysis and transplantation, for both patients and professionals. The American Journal of Kidney Diseases (AJKD) was launched by NKF in 1981 and has become the go-to resource for cutting-edge clinical science, together with NKF's three other peer-reviewed publications.

The Foundation's ability to develop and disseminate major programs and to influence government policy continued. NKF was a leader in crafting and passing the National Transplant Act in 1984 which prohibited the sale of organs. Around this time, the Foundation began teaming up with corporate partners to obtain the funding needed to develop education programs that continue to improve the lives and health of kidney patients and their families.

The NKF was responsible for developing the first broadly accepted clinical practice guidelines in nephrology, which eventually became known as KDOQI—Kidney Disease Outcomes Quality Initiative. The first guidelines were published in 1997, and today there are 12 guidelines, which are setting the standards for treatment of all aspects of kidney disease and have made a major difference in the quality of care for kidney patients worldwide. The 2002 Chronic Kidney Disease clinical practice guideline established the landmark "Five Stages of Kidney Disease," highlighting for the first time the opportunity for slowing the disease and preventing complications through early detection. This effort is changing the way kidney disease is identified and treated, providing millions of patients with the opportunity to stay healthy longer.

One of NKF's great achievements was the development of the largest and most effective early detection program for kidney disease ever launched in the United States. First tested in 1997, the Kidney Early Evaluation Program (KEEP) was designed to find kidney disease at the earliest stage possible. More than 250,000 participants were screened since the program's inception and tens of thousands of people at risk have learned to protect their kidneys through healthy lifestyle as a result.

NKF's interest in promoting guideline development and implementation led to the establishment of "Kidney Disease: Improving Global Outcomes" or KDIGO. In 2003, with the blessing of prominent nephrologists from around the world, NKF helped create an organization to bring the global kidney community together with the goal of developing a common set of core practice guidelines that could be implemented worldwide. Managed by NKF, KDIGO published its first guideline, covering Hepatitis C in Chronic Kidney Disease in Kidney International. KDIGO has since published seven more guidelines. One of NKF's most valuable assets is the "Kidney Learning System," or KLS, established in 2003 as the core of NKF's education programming. All of the Foundation's patient and professional tools and learning opportunities are developed through KLS, which maintains an extensive and ever-growing library of resources available in multiple formats. KLS's activities are helping NKF further public awareness about risk factors and the Five Stages of Chronic Kidney Disease, and supporting healthcare professionals.

In its ongoing efforts to strengthen and unify the voices of the more than 37 million Americans with chronic kidney disease, the NKF offers a robust patient advocacy program. This program is educating, empowering and encouraging effective advocates on key health issues.

NKF patient advocates learn to effectively communicate their personal stories to legislators and to participate in activities related to public policy initiatives that affect their lives-funding for treatment, research and education. NKF advocates establish and maintain contact with Members of Congress and state and local officials through phone calls, letters, and personal visits. To expand this effort, NKF launched the Take Action Network in 2007, an e-advocacy system that allows people to immediately email their representatives in Congress when urgent legislative and policy issues arise. Tens of thousands of messages have been directly delivered to Congress through this network.

Today, the National Kidney Foundation participates in research that is helping advance knowledge about chronic kidney disease, treatment and patient outcomes. Test results from NKF's Kidney Early Evaluation Program are studied and analyzed to help doctors find ways to improve outcomes and better treat kidney disease in specific, at-risk populations. In 2011, NKF also launched its first ever cross-sectional multi-site study that assessed how chronic kidney disease is being identified and managed in those most at risk—Type II diabetic patients.

Using the contributions of leading investigators from 45 studies, the NKF is creating and analyzing the world's largest dataset about patient outcomes at all stages of chronic kidney disease. Since it's a spectrum disease, at each stage, people experience different complications- from stroke and hypertension to infections and acute kidney disease. This research is examining how these complications impact a patient's prognosis at each stage.

NKF continues to grow and conduct stronger and more effective programs throughout the United States and around the world. As the organization leading the fight against kidney disease, we are now focusing on three major areas where we can make the greatest impact on the health and lives of millions. These include awareness, prevention and treatment. One in three Americans over age 20—73 million people—is at risk for kidney disease because of diabetes, high blood pressure or family history.

The goal of the National Kidney Foundation is to reach those at risk before kidney disease occurs, and impact those in earliest stages so that progression to later-stage disease is no longer inevitable. At-risk individuals will have the educational tools to maintain a healthy lifestyle that protects kidney health, and will be empowered to seek out testing and treatment from their physicians.

Physicians must also have the resources to detect kidney disease early and provide appropriate treatment and management to prevent disease progression. And so we are also reaching out to primary care practitioners so they will know which tests to order and how to recognize early-stage kidney disease, which will increase the total number of diagnoses of kidney disease. In addition, primary care practitioners have the knowledge and tools to treat early-stage kidney disease in order to slow its progression, and refer their patients to nephrologists when they need more specialized care.

The Foundation realizes there is still much more to do and believes that we are poised to meet the public health challenge of chronic kidney disease. Throughout our history, up until today, Ada DeBold's legacy of providing education and support to those touched by kidney disease continues to be a guiding light.