Wake Forest University baseball coach, Tom Walter, broke with tradition this season. Like all other coaches, he wore the team uniform and sat among the players in the dugout. Unlike any other, he actually got in the game, stepping up to the plate in a most unusual way.

After learning that one of his players, freshman Kevin Jordan, was in desperate need of a kidney transplant, he offered up one of his own. In honor of Donate Life Month in April, Coach Walter offers "Love Your Kidneys" readers his own Top 5 Tips for Living Donation.

‘Moonface': A Story of Family and Transplantation

In her newly-released memoir, MOONFACE: A True Romance, three-time transplant recipient Angela Balcita, 36, describes what it was like to suffer kidney failure her freshman year of college and receive a donor organ from her brother, which her body later rejected. Lucky for Angela, her boyfriend, Charlie (who affectionately nicknamed her "Moonface"—a strange side effect of her medicine), offered her his kidney without hesitation even though they'd only known each other a short time. The story that unfolds is by turns funny, bittersweet, and heartwarming—about how difficult it can be to accept the gifts of unconditional love and sacrifice.

Click here to read an excerpt from the book.

Click here for more on living donation and transplantation.

Primary care physicians spend very little time discussing risk factors and preventative steps with patients at risk for kidney disease, and new research, to be presented this month at the National Kidney Foundation 2011 Spring Clinical Meetings, is trying to change that.

"Primary care physicians are our first line of defense against one of the world's top killers," said Lynda A. Szczech, MD, MSCE, President of the National Kidney Foundation. "More than 37 million Americans already have chronic kidney disease, and millions more are at risk and don't even know it. We don't want those at risk to join the 570,000 Americans with kidney failure — we need doctors to communicate with their patients about what they can do to protect their kidneys over the long term."

Click here to find a free kidney screening in your area. 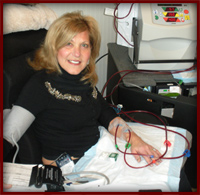 More than 13 years ago, Francine Hillpot of Staten Island, NY, was told that she had chronic kidney disease and could expect her kidneys to fail within two years. Instead of sulking, this 55-year old mother and executive assistant became vigilant about her health. Hillpot began monitoring her kidney function regularly and following a healthy diet which helped her stave off kidney failure for a full decade. It was only after undergoing chemotherapy treatment to combat non-Hodgkin's lymphoma that her kidneys shut down and she needed to rely on dialysis to do what her kidneys no longer could.

If you're looking to spend more time outdoors this Spring and less time poring over a hot stove, the Kidney Kitchen has just the recipe for you. With protein, vegetables and grains all in one dish, this simple snow pea and orzo salad can be a full meal that's delicious, fast and easy to whip up.

A Short Walk Can
Go a Long Way

This Spring, join tens of thousands of National Kidney Foundation supporters who'll be stepping out to save lives in more than 100 Kidney Walks in cities across the country.