As the mercury in your outdoor thermometers rises to triple digit levels, it is important to maintain a healthy body temperature. People with chronic disease and those taking medications, such as immunosuppressive drugs, need to be especially careful. As more than 1,200 immune-suppressed athletes train for the 2010 National Kidney Foundation U.S. Transplant Games , NKF's fitness expert Chris L. Wells, PhD, offers 10 ways to avoid heat illnesses this summer.

Howard Nathan has attended every single National Kidney Foundation U.S. Transplant Games event since 1990. A NKF board member who is also CEO of Philadelphia's Gift of Life Donor Program, one of the largest organ procurement organizations in the country, Nathan joins NKF in celebrating the Games' 20th anniversary and recounts its success in showcasing the power of organ donation through athletics. 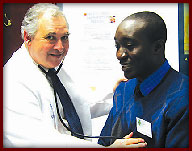 As a pre-teen, Chester Fox knew he was destined for a career in medicine. Suffering from a difficult-to-diagnose condition, his pediatrician insisted the illness was all in his head and sent him to the psychologist's couch. After finding another doctor who nailed his diagnosis, Fox was determined to become a doctor himself, if only to save people from guys like his first doctor who was so quick to dismiss his pain. Fox recently won an NKF research award through which he'll be helping family doctors uncover the mysteries of kidney disease. 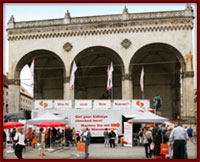 NKF Takes Early Detection and Awareness Message across the Atlantic

The bar was raised for kidney health awareness as more than 700 people took advantage of a free kidney check in the historic Odeonsplatz in downtown Munich last month. The kidney risk assessment was conducted by the National Kidney Foundation in partnership with Munich University Hospital, the German Kidney Foundation and the German Society of Nephrology and sponsored by Vifor Pharmaceuticals. The National Kidney Foundation offers free kidney screenings all over the U.S. through its Kidney Early Evaluation Program. To find one near you click here.

Enjoy the Backyard Barbecue without the Salt this Summer

With summer now in full swing, families across the nation have taken their regular dining alfresco. If you're competing with neighbors on the block to fill the backyard air with the most tantalizing aromas, don't settle for store-bought, high sodium barbecue sauces. The Kidney Kitchen's tomato-free BBQ sauce is a homemade delight that's low in sodium and still high on taste.