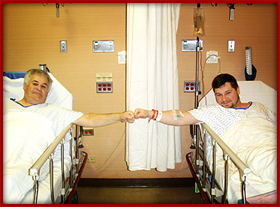 A potential kidney donor is far more motivated to donate a kidney based on a close relationship with the recipient than on a monetary incentive, according to new research published this summer in NKF's Journal of Nephrology Social Work.

In the first phase of this study, led by Dr. Harry Humphries and his associates at Pittsburg State University in Pittsburg, Kansas, researchers surveyed 73 undergraduate students using standardized scales to "explore the social structures of kidney transplants and to empirically examine social distance and material incentives."

"Social distance is a major factor in kidney donation motivation," Dr. Humphries noted. "This was not surprising, but we were surprised that prior researchers had not used a standardized instrument to test for this relationship."

Dr. Humphries recommends that kidney transplant candidates "cast a wide net utilizing acquaintances and social networks such as members of occupational, religious or ethnic groups, social clubs, schools, athletic associations, and so on, who might be interested in donating."

When looking at the motivations of potential donors, the research team found fairly strong support for living donors to be compensated for medical expenses and lost wages, and that a federal tax deduction would be appropriate. The subjects also endorsed altruistic giving with no compensation.

"The other major finding was that folks in our sample rejected the idea of a $60,000-$70,000 material incentive. The use of money seems to be distasteful to many potential donors," the researcher said.

The next phase of their research was conducted at the NKF's 2009 Spring Clinical Meetings in Nashville, where the team surveyed transplant surgeons, nephrologists, nurses and social workers on the motives that drive the unrelated kidney donor.

The National Kidney Foundation recently embarked on a comprehensive action plan to address the urgent need to increase the number of organs available for transplantation in the U.S.

This END THE WAIT! initiative is a virtual call-to-arms designed to put in place tested and proven actions relating to education, financial and medical practice. In collaboration with other major organizations in the kidney care and transplant communities, the NKF is leading this initiative that began in January of 2009 and will end the wait for kidney transplants within 10 years.

One of the major End the Wait! Recommendations is increasing the number of living donors by ensuring that they are reimbursed for all expenses involved in the donation, including lost wages, and by providing access to health care and life insurance coverage. As part of this initiative, the NKF recently supported proposed legislation that would offer living donors a tax credit equal to their unreimbursed costs and lost wages associated with the transplant, up to $5,000.