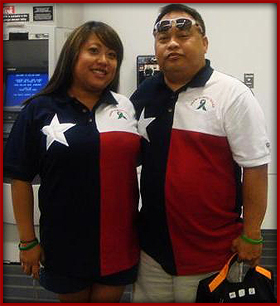 What do you buy your dad for Father's Day when you've already given him a kidney?

"Not much," says Marie Eraso of Los Angeles. "At this point, just visiting him and appreciating the healthy life he now lives is enough of a gift for him and for all of us."

Back in the fall of 2005, when Marie left her home in Dallas for Los Angeles to attend the Fashion Institute of Design and Merchandising, she was worried. Being so far away from home would be a big adjustment and knowing that her father, Ramoncito, was ill made her leave-taking all the more bittersweet.

Her dad's kidneys were failing and he had just been placed on the national transplant waiting list. By the time she returned home six months later for spring break, her father was already being prepped for dialysis treatment.

Marie was familiar with the thrice-weekly dialysis regimen, having volunteered in a dialysis center as part of a high school community service project. The more she thought about her father's situation, the more determined she became to get herself tested as a potential kidney donor. A few weeks after she made this decision, on her 24th birthday, Marie learned that she was a match and doctors cleared her to become his donor.

Besides teaming up biennially to celebrate life and support each other at the National Kidney Foundation's Olympic-style U.S. Transplant Games , the family gathers in Dallas once a year. The kidney transplant, Marie's birthday and Father's Day all fall within a few months of each other, so between the three occasions, the family gets together, enjoys each other's company and a cake to celebrate life, family and second chances.

"It's our own little three-in-one birthday-transplant anniversary-Father's Day party," Marie explains. "We are all lucky to be here and we enjoy spending that time together to recognize what we have—a second chance to be a family."