Fish Swims to the Top of the Diabetic Diet 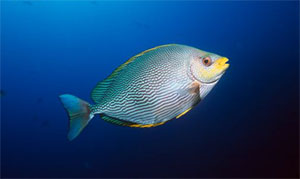 Adding fish to the dinner menu twice a week may lower the risk of kidney disease in people with diabetes, according to a study published in the November issue of American Journal of Kidney Diseases, the official journal of the National Kidney Foundation.

“Diet is a relatively simple lifestyle change to make and the benefits could be significant,” says Dr. Kerry Willis, Senior Vice President for Scientific Activities at the National Kidney Foundation.

A British research team studied more than 22,000 middle-aged and older men and women, 517 of whom had diabetes. Fish consumption was determined using dietary and lifestyle questionnaires.

Participants with diabetes who on average ate less than one serving of fish per week were four times more likely to have macroalbuminuria, or protein in the urine, than those who ate at least two servings per week. Co-investigator Amanda Adler, MD, PhD, at the Medical Research Council Epidemiology Unit, Addenbrooke’s Hospital, in Cambridge and her associates found that 18 percent of those with low fish consumption had macroalbuminuria, versus four percent of those who regularly included fish in their diet. Dr Adler noted that people who eat fish may differ in other ways that lessen their chance of albuminuria, but that the study attempted to account for this possibility.

Kidney disease is one of the most serious complications of diabetes. After years of diabetes, the filtering units of the kidney get scarred and cannot clean the blood efficiently. Eventually, the kidneys may fail completely so that a person with the disease needs dialysis or a kidney transplant. Albuminuria is also tied to higher rates of heart disease.

In addition to adding fish to one’s food regimen, the National Kidney Foundation says tight control of glucose also lowers the risk of development of albuminuria. Other measures are keeping blood pressure under control, quitting cigarette smoking and following a diabetic diet, as prescribed by a doctor.

For information on diabetes and chronic kidney disease click here.