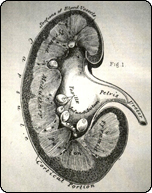 “There’s nothing wrong with my kidneys,” David G. told his doctor. “I’m going to the bathroom just fine.” David’s doctor had been trying to convince him to take better care of his diabetes and lose some weight. She told him that diabetes was the number one cause of kidney failure. She had been following his glomerular filtration rate (GFR). It was going down. She had been following his blood pressure. It was rising. Both were signs that kidney disease might be developing.

“But I don’t feel any pain. There can’t be anything wrong,” David said.

“It’s not that simple, David. You don’t have to have pain. Your kidneys can be damaged silently. You wouldn’t know without tests. There are usually no symptoms,” she said.

“I’m too young to have kidney problems,” David said. She responded: “CKD can affect anyone—young or old!” David protested: “I’ve had diabetes for five years and nothing has been wrong with my kidneys.” She responded: “Your kidneys can be slowly damaged by high blood sugar. CKD doesn’t happen overnight!”

People with early kidney disease may not know anything is wrong. They can't feel the damage before any kidney function is lost. It happens slowly, and in stages. Early detection with the right treatment can slow kidney disease from getting worse. There are 5 stages of chronic kidney disease. Each stage is worse than the one before.

Three simple tests can help find kidney problems. What are the tests measuring?

These simple tests for kidney disease should be done in people at risk. You are at risk if you have diabetes, high blood pressure, family history, are older than 65 years, or have other conditions that suggest a problem.

The three tests are:

Other tests may also be needed, such as x–rays, ultrasounds, or scans.

When David’s doctor took these tests, she called him with the news that he had stage 2 chronic kidney disease.

“Well, okay. Give me the prescription to cure it,” David said.

“Chronic kidney disease can’t be cured,” she said. “But it can be treated. It is a chronic disease. It will never go away. But you can help by living a healthy lifestyle and taking better care of your diabetes.” The goals of treatment, she explained, are to slow kidney disease from getting worse and to prevent heart and blood vessel disease.

The earlier kidney disease is found, the earlier it can be treated.