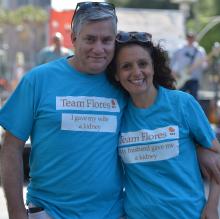 New York, NY – Immediately after donation, living donors show mild signs of kidney disease, but actually improve their kidney function over time, according to the results of a prospective study published in the July issue of National Kidney Foundation's American Journal of Kidney Diseases.

“We’ve always assumed that living kidney donation is safe, and it is, but safety is a relative thing,” said lead researcher Bertram Kasiske, MD, of Hennepin County Medical Center in Minneapolis, Minnesota. “There have not been the long-term studies with suitable controls that we need to prove the safety of living kidney donation over time.”

The study, now in its sixth year of assessing donors and controls, is looking specifically at medical history, vital signs, kidney function, and lab values of donors.

“It looks like the remaining kidney is still compensating for the loss in function at three years after donation,” said Dr. Kasiske. “It will be interesting to see if these kidney function increases continue over time.”

However, Dr. Kasiske noted there were some observed abnormalities among the living donor population. For donors, serum parathyroid hormone, uric acid, homocysteine, and potassium levels were all higher than controls, while hemoglobin levels were lower. These abnormalities could portend to higher risk of fractures or bone problems later in life, while elevated uric acid levels coincide with reports of increased rates of gout in some kidney donors.

“None of this would prevent people from donating, but they are abnormalities we need to study and understand more,” said Dr. Kasiske. “It’s a moral and ethical mandate to do these studies, and we should inform donors if we find things that could influence their health, even if it’s minor.”

While this study is important in assessing how the removal of a kidney affects the human body, it may not answer long-term outcomes such as the risk of kidney failure or premature death.

“This ongoing study is very important to help us understand risks, but we still have to do larger, long-term study to answer the bigger questions,” said Tom Manley, director of scientific activities, National Kidney Foundation. “Ideally a national registry of living donors will be established to assess the risk of mortality, kidney failure and predisposition to comorbidities over their lifetime.”

The National Kidney Foundation is the leading organization in the U.S. dedicated to the awareness, prevention and treatment of kidney disease for hundreds of thousands of healthcare professionals, millions of patients and their families, and tens of millions of Americans at risk. For more information, visit www.kidney.org.