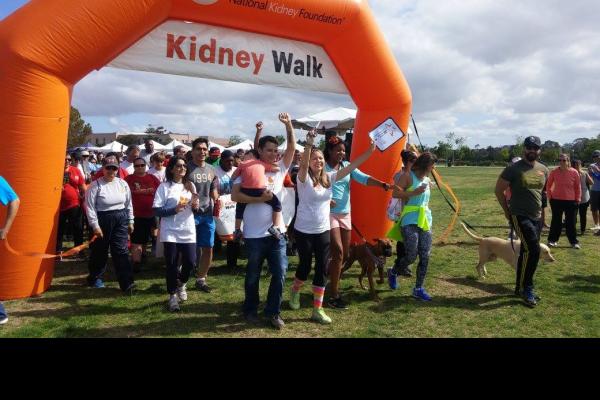 NEW YORK CITY, March 22, 2017 – For the annual kickoff of Kidney Walk events in March, the National Kidney Foundation (NKF) is setting one of its highest goals yet – $10,000,000 – based on record-breaking corporate team fundraising in 2016 led by LogistiCare.
The nation’s largest non-emergency medical transportation manager has emerged as NKF’s first company to raise more than $100,000 through a single year of Kidney Walks. LogistiCare is one of eight National Teams that encourage Kidney Walk fundraising and participation across multiple cities and states.
“We are so appreciative of the support LogistiCare has provided to our Kidney Walks across the country,” said Kevin Longino, CEO of National Kidney Foundation. “LogistiCare’s ongoing commitment to people with kidney disease, both in their business and in their charitable contributions, is an example of good corporate citizenship at its best,” added Longino.
LogistiCare’s commitment to helping people fight kidney disease is rooted in its core mission. Each year, LogistiCare enables more than 13 million trips to dialysis centers – some 20 percent of the nearly 70 million healthcare trips it manages annually for private, commercial and government-assisted riders.
For more than three years, LogistiCare has fought kidney disease through a national initiative and partnership with NKF that secured more than $130,000 in 2016, more than doubling its 2015 efforts. Beyond fundraising, the company annually dedicates more than 8,000 in-service hours to educate its 4,000 associates and their families about the silent disease and 16,000 volunteer hours planning and participating in Kidney Walks across the country.
“All of us at LogistiCare have a personal stake in the fight against kidney disease because it improves care for the members we serve across the country – well beyond the rides we provide,” said Gregg Bryars, senior vice president of operations at LogistiCare, who also serves as the company’s NKF leadership chairman. “Supporting NKF has created a strong culture of teamwork and service throughout our organization, with more to come in 2017.”
Kidney Disease Facts
1 in 3 American adults is at risk for kidney disease.  26 million American adults have kidney disease—and most aren’t aware of it.  Risk factors for kidney disease include diabetes, high blood pressure, family history, and age 60+.  People of African American; Hispanic; Native American; Asian; or Pacific Islander descent are at increased risk for developing the disease.  African Americans are 3 ½ times more likely, and Hispanics 1 ½ times more likely, to experience kidney failure.
About National Kidney Foundation
The National Kidney Foundation (NKF) is the largest, most comprehensive and longstanding organization dedicated to the awareness, prevention and treatment of kidney disease.  For more information about the NKF visit www.kidney.org.
About LogistiCare
LogistiCare, a wholly owned subsidiary of The Providence Service Corporation (NASDAQ: PRSC), is the nation’s largest manager of non-emergency medical transportation programs for state governments and managed care organizations. Its services include call center management, networking credentialing, vendor payment management and NEMT management.