Golf teams from New York and Arizona bested the competition at the nation’s premier golf course over the weekend. 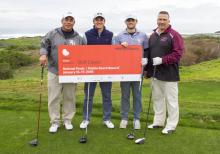 In the Gross division, William Bernstein of New York City, James Nicholas of Scarsdale, NY; Dr. Stephen Nicholas of Scarsdale; and Andrew Verboys of Armonk, NY; finished in first place at the National Kidney Foundation Golf Classic National Finals. The team shot rounds of 59-59-57 for a three-day total of 175 in the tournament held at the legendary Pebble Beach Resorts.

In the Handicap Index division, Joe Dufek of Scottsdale, AZ; Michael Dufek of Chicago, IL; Daniel Mezich, of Cardiff, CA; and Mark Upchurch of Rancho Peñasquitos, CA; finished in first place. Their team shot rounds of 57-56-62 for a three-day total of 175. 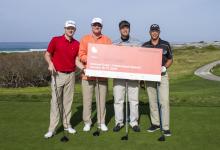 Both teams qualified for the Pebble Beach finals by finishing in the top 5 of their local NKF Golf Classic events held in 2015. They faced off against 50 other amateur golf teams from across the country over the weekend. Teams played the fabled fairways and signature holes of the Monterey Peninsula: Pebble Beach Golf Links, Del Monte Golf Course and The Links at Spanish Bay in the four-person scramble format event.

The National Kidney Foundation Golf Classic, a nationwide series of over 30 golf tournaments held in major cities across the country, is the Premier Amateur Golf Event for Charity, raising more than $3.5 million annually for NKF.

The next opportunity to qualify for the National Finals at Pebble Beach will be at local NKF Golf Classic tournaments across the country in 2016. To register or for more information, visit www.NKFGolfClassic.org.

The National Kidney Foundation is the leading organization in the U.S. dedicated to the awareness, prevention and treatment of kidney disease. For more information about kidney disease, visit www.kidney.org.