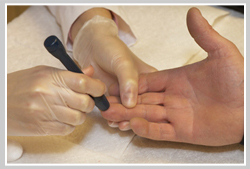 New York, NY (November 14, 2005) - Significant risk factors for chronic kidney disease (CKD) are not being addressed in the United States, according to the third annual report of the National Kidney Foundation's (NKF) Kidney Early Evaluation Program (KEEP), published as a supplement to the November issue of the American Journal of Kidney Diseases.

This report summarized health information on 37,155 individuals who are at risk for kidney disease. Risk factors include diabetes, hypertension or a family history of diabetes, hypertension or kidney disease. Half of the participants in the report had CKD, yet only two percent were aware of it. Those with the disease tend to have other serious health problems, such as obesity and anemia.

According to this latest KEEP report, 77 percent of participants are obese; 30 percent have diabetes; more than 50 percent have high blood pressure; and only one in four has it adequately controlled. In those with diabetes, only half of the patients had blood sugars in the target range.

"Awareness of risk factors such as diabetes and hypertension and the need for screening can go a long way toward early detection and prevention of kidney disease," says Allan Collins, MD, president-elect of the NKF and Director of the KEEP Data Coordinating Center.

"Ninety percent of KEEP participants reported visiting their doctors in the last 12 months," continues Collins, "yet most were not aware that they could be at risk for chronic kidney disease. While physicians were treating diabetes and hypertension alone, they were not treating them as risk factors for CKD and so most of our participants were not tested for kidney disease at their checkups."

The right kind of screening is of critical importance, according to the NKF. Almost half of KEEP participants test positive for microalbuminuria or trace amounts of protein in the urine which is the earliest sign of kidney disease. This increases to more than 60 percent of those with diabetes in Stage 3 CKD, 80 percent in Stage 4 CKD and nearly 100 percent in Stage 5 CKD. 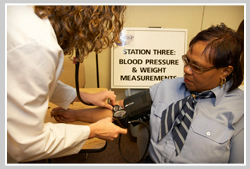 "The good news is that we appear to be having an effect on many populations that would advance to dialysis or kidney transplantation. Nearly 60% of KEEP participants provide post-screening follow up information and many report consulting with their physicians regarding elevated blood pressure, anemia, urine test abnormalities and more. These findings suggest we should increase our efforts, since the treatments that have been shown to be effective are changing the course of kidney disease, a condition that used to be considered untreatable," says Collins.

For more information on KEEP, the annual data report or for a list of upcoming screenings, visit www.keeponline.org.