Nearly one-quarter of New Orleans residents receiving dialysis for kidney failure had post-traumatic stress disorder (PTSD) one year after Hurricane Katrina leveled their communities, according to a new study published in the October issue of American Journal of Kidney Diseases, the official journal of the National Kidney Foundation (NKF).

African-Americans, those who began dialysis less than two years earlier, and patients who missed three or more dialysis treatments after the hurricane were most likely to feel the long-term psychological effects of Katrina. 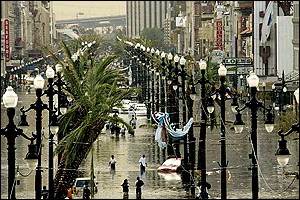 During the study, conducted one year after the hurricane hit the Gulf Coast in August, 2005, a research team from Tulane University interviewed 391 people who had been receiving dialysis at nine dialysis units in the New Orleans metropolitan area prior to the storm.  The study respondents were displaced across 18 states at the time they were interviewed.  According to study author, Dr. Amanda Hyre, it is especially important to identify PTSD in the dialysis population who remain displaced. “It is worrisome that the study participants who had not returned home were 47% more likely to have PTSD.  While the awareness of PTSD following Hurricane Katrina is high in New Orleans, it may be an overlooked issue in other parts of the country.  There are effective treatments for PTSD but it first needs to be identified.”

To measure the prevalence of PTSD, the researchers asked people if they were having flashbacks about the storm, experiencing avoidance or numbing – such as distracting themselves from thinking about the storm – and feeling hyperarousal, defined as being jumpy or easily startled.

They found that 23.8% of participants were experiencing PTSD. Another 18.4% showed at least two symptoms of PTSD; only 33.3% were not experiencing any PTSD symptoms.

Those most at risk also included people evacuated less than two days before the storm hit, people who were hospitalized the month following the hurricane, and those displaced for at least three months.

“Missing dialysis sessions can have a significant long-term impact on the health of dialysis patients,” warns Vassalotti. “Emergency plans should emphasize getting dialysis patients out of a disaster area quickly and safely, and ensure they receive the dialysis they need to avoid long-term physical and psychological effects.”

To assist those whose personal and professional survival depended on receiving and providing life-saving dialysis treatments in the face of a natural disaster, NKF has developed People Like Us: Stepping Back into Life. This initiative addresses the trauma, despair and depression plaguing Louisiana through a CD-Rom program that offers support and coping tools for patients to be delivered by professionals. The program has reached thousands of people on dialysis and kidney care professionals, including every single dialysis social worker in the state.