New York, NY (October 11, 2007) - Two simple blood and urine tests will detect chronic kidney disease (CKD) in millions of people who are in early stages of the disease but have no symptoms, when they may benefit most from treatment, according to a new position from the National Kidney Foundation, published in the American Journal of Kidney Diseases. 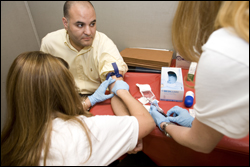 “These two tests facilitate detection of CKD by all physicians, not just nephrologists,” says co-author Lesley A. Stevens, MD, based at the Tufts-New England Medical Center in Boston, MA.

The two tests, which measure urinary protein and estimated glomerular filtration rate, detect the early stages of CKD, already present in an estimated 20 million (or 1 in 9) U.S. adults. Millions who have CKD don’t know it. Among the nearly 90,000 people at risk for CKD who were screened during the NKF’s nationwide Kidney Early Evaluation Program (KEEP), only 6.7% of those diagnosed with CKD were aware they had the disease.

People with diabetes, hypertension, cardiovascular disease, a family history of CKD and those aged 60 and older are more at risk.

In 2000, approximately 400,000 people received dialysis or kidney transplantation due to kidney failure; that number is projected to reach 2 million by the year 2030.

“CKD is usually silent until its late stages, which means most patients are diagnosed shortly before the onset of symptomatic kidney failure, when there’s less opportunity for treatment,” says Allan Collins, NKF president. “In principle, identifying CKD patients earlier in the course of their disease gives us more time to evaluate and treat them before symptoms even kick in.”

CKD is defined as the presence of kidney damage or a glomerular filtration rate (GFR) of less than 60 mL/min/1.73 m2 for at least 3 months.

Increased excretion of urinary protein, or proteinuria, is the most common marker of kidney damage in adults. A spot urine sample that measures the ratio of albumin-to-creatinine or total protein-to-creatinine is recommended. At least two abnormal readings over at least three months are required, since temporary factors such as urinary tract infection can increase protein excretion.

GFR is the best overall measure of kidney function, but measurement is cumbersome and expensive, and therefore not practical for routine use. Usually, physicians rely on serum creatinine levels to estimate GFR. The Modification of Diet in Renal Disease (MDRD) Study equation was developed in CKD patients, and recent research suggests the equation is reasonably accurate in non-hospitalized American or European populations with estimated gfr < 60ml/min per 1.73 m2. It is unclear how well the MDRD Study equation estimates GFR in children, pregnant women and people in other ethnic groups.

Patients with CKD stage 4 should be referred to a nephrologist for co-management with their primary care physician or other specialists.

"These two tests do have some limitations," says Stevens. "Understanding their limitations facilitates their use by primary care physicians to spot CKD in their patients earlier and easier."