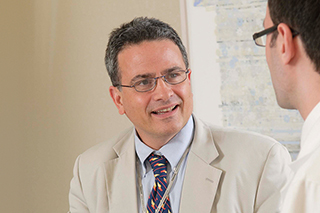 New York, NY (May 28, 2013) – Carefully removing cancerous portions of a kidney can save lives and preserve kidney function, but physicians and patients may not be aware of the benefits of kidney-sparing surgeries, according to new research published online in the National Kidney Foundation's American Journal of Kidney Diseases.

Radical nephrectomy — the operation which removes the entire kidney and its surrounding tissue — has been shown to increase the risk of developing chronic kidney disease and associated cardiovascular complications when used to treat small renal tumors. Nearly 50% of all small renal tumors are benign with limited metastatic potential. Despite the risks, researchers found that a majority of kidney cancer patients, even those already diagnosed with chronic kidney disease, still underwent this procedure.

“It’s disheartening to know that radical nephrectomy is much more commonly performed even though a less aggressive surgery is as effective and prevents or delays the onset of chronic kidney disease.” said lead researcher Paul Russo, MD, Attending Surgeon at Memorial Sloan-Kettering Cancer Center in New York and Professor of Urology at Weill Medical College.

Russo’s team found that partial nephrectomy, which removes tumors but aims to save as much of the kidney and its function as possible, was utilized in less than 20 percent of kidney cancer patients surveyed. Even 80 percent of those with early stage kidney cancer had their entire kidneys removed. Researchers also found that most of those who underwent radical nephrectomy were unaware of the risk for developing or worsening chronic kidney disease.

“Overall there seems to be a general lack of understanding of the complications to kidney function that can come along with radical nephrectomy,” Dr. Russo said. “Our study clearly indicates the need for enhanced education of medical and surgical professionals, and patients and their caregivers alike in the importance of kidney-sparing options for the management of small kidney tumors."

More than 25% of patients said they were not told about partial nephrectomy, its benefits, and whether they were a candidate for such an operation.

Russo believes that this study will help create better practices where second-opinions and partial nephrectomy will be discussed prior to making the decision to undergo radical nephrectomy.

The National Kidney Foundation (NKF) is the leading organization in the U.S. dedicated to the awareness, prevention and treatment of kidney disease for hundreds of thousands of healthcare professionals, millions of patients and their families and tens of millions of Americans at risk.