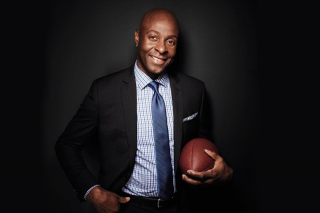 Wide Receiver Carries Personal Connection While Reminding Public to “Heart Your Kidneys”
New York, NY—July 31, 2017— Pro Football Hall of Famer Jerry Rice has teamed up with National Kidney Foundation (NKF) as its social media ambassador to encourage all Americans to “Heart Your Kidneys.” Rice’s tie to kidney disease has motivated him to join this public awareness campaign (#HeartYourKidneys) that seeks to lift the kidneys to the status of other, better-understood vital organs like the heart so that people understand what kidneys do and why they are vital to sustaining life.
The three-time Super Bowl champion played 20 years in the National Football League while devoting time to family, including his older brother Tom Rice, who has kidney disease and has been on dialysis for more than two decades, three days a week – with Jerry Rice sometimes spending the long hours sitting by his side. This direct connection already has allowed the sports icon to become an effective and passionate television spokesman in Mississippi, his home state, where he has helped raise awareness about the seriousness of kidney disease, including among African Americans, who are at highest risk.
As a “Heart Your Kidneys” social media ambassador working with NKF, Rice will post messages on his Twitter and Instagram accounts promoting kidney health, tagging NKF and using the #HeartYourKidneys hashtag. Also, similar to a popular, beverage-related social media promotion he posts once a week, for this NKF educational campaign he will post pictures of himself with a glass of water using the #WaterWednesday hashtag to highlight the importance of drinking water for healthy kidneys. In addition, Rice will post smartphone-shot videos of himself reminding people to #HeartYourKidneys while giving quick kidney health tips.
“People will see in my social media posts that this really hits home for me,” Rice said. “Most folks don’t think twice about their kidneys and take them for granted. So, I want everyone to learn about how important kidney functions are and what simple lifestyle changes can help reduce the risk for kidney disease.”
NKF is proud to partner with Rice and believes his genuine link to and concern for kidney disease will resonate well with his adoring fans and anyone who sees his social media posts.
“As the brother of a dialysis patient, Jerry knows and understands the incredible burden of kidney disease and the importance of kidney health,” said Kevin Longino, CEO, National Kidney Foundation. “We also know that his NFL star power can help persuade many more people to show kidneys some love just like they do the heart. We need kidneys to stop getting the short end of the stick,“ added Longino, who received a kidney transplant 13 years ago.
Kidney Disease Facts
30 million American adults are estimated to have chronic kidney disease—and most aren’t aware of it. 1 in 3 American adults are at risk for kidney disease. Risk factors for kidney disease include diabetes, high blood pressure, heart disease, obesity and family history. People of African American, Hispanic, Native American, Asian or Pacific Islander descent are at increased risk for developing the disease. African Americans are 3 times more likely than Whites, and Hispanics are nearly 1.5 times more likely than non-Hispanics to develop end stage renal disease (kidney failure).
The National Kidney Foundation (NKF) is the largest, most comprehensive and longstanding organization dedicated to the awareness, prevention and treatment of kidney disease.  For more information about NKF visit www.kidney.org.