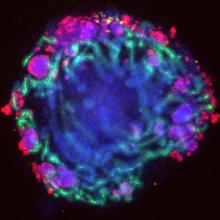 Boston, MA and Seattle, WA (October 23, 2015) – For the first time, investigators at the Brigham and Women’s Hospital, Harvard Medical School, and the University of Washington have successfully grown mini-kidney ‘organoids’ that re-create human kidney disease in a petri dish. The findings, which combine stem cell biology with cutting-edge gene-editing techniques, are reported in the journal Nature Communications.

The mini-kidney organoids were grown from pluripotent stem cells, personalized cells that have ‘turned back the clock’ to a time when they could become any type of organ in the body. When treated with a chemical cocktail, these stem cells matured into structures that resembled miniature kidneys. These mini-kidney organoids contained tubules, filtering cells, and blood vessel cells, and could transport chemicals and respond to toxic injury similar to kidney tubules in patients.

“A major unanswered question was whether we could re-create human kidney disease in a petri dish using this technology,” says Dr. Benjamin Freedman, PhD, lead author on the study, now an Assistant Professor in the Division of Nephrology, Department of Medicine at the University of Washington. “Answering this question was important for understanding the potential of mini-kidneys for clinical kidney regeneration and drug discovery.”

“Mutation of a single gene results in changes in kidney structures associated with human disease, allowing better understanding of the disease and serving as models to develop therapeutic agents to treat these diseases,” explains Dr. Joseph Bonventre, MD, PhD, senior author on the study and Chief of the Renal Division at Brigham and Women’s Hospital at Harvard.

"These genetically engineered mini-kidneys have taught us that human disease boils down to simple components that can be re-created in a petri dish,” adds Freedman. “This provides us with faster, better ways of testing out drugs and therapies that might work in humans.”

Importantly, genetically-matched kidney organoids that did not possess disease-linked mutations showed no signs of either disease. “CRISPR can be used to correct genetic mutations,” explains Freedman. “Our findings suggest that gene correction using CRISPR may be a promising new therapeutic strategy.”

“As a result of this new technology, we can now grow new kidney tissue on-demand, which is 100 % immunocompatible with our own bodies,” says Freedman. “We have shown that these tissues can mimic both healthy and diseased kidneys, and the organoids can survive in the mouse after being transplanted. The next question is whether they can perform the functions of the kidney after transplantation.”