One in Seven American Adults Estimated to Have Chronic Kidney Disease 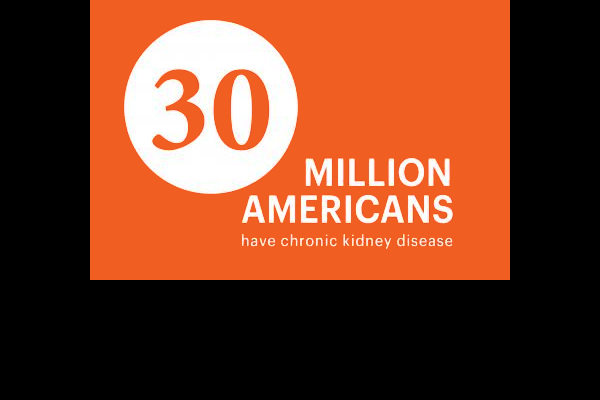 New Data from the Centers for Disease Control and Prevention Shows 30 Million Americans Affected
New York, NY—June 6, 2017—The number of Americans affected by chronic kidney disease (CKD) is higher than previously estimated and affects 15% of the U.S. adult population, this according to new data analyzed by the Centers for Disease Control and Prevention (CDC).  One in seven American adults, or 30 million people, are estimated to have CKD.  However, 96% of those with early kidney disease (stages 1 and 2) don’t even know they have CKD.  And of those with severely reduced kidney function, (stage 4) but not on dialysis, 48%, are not aware of having the disease.

“30 million Americans are affected by chronic kidney disease and most do not even know they have it.  Let these new statistics from CDC serve as a warning bell that a major public health challenge is right in front of our eyes and more must be done to address it,” said Kevin Longino, CEO, National Kidney Foundation and a kidney transplant patient.  “Additional federal resources must be allocated towards increasing public awareness about the disease and advancing programs targeted towards prevention and early detection.  Leaders in the healthcare industry also need to prioritize CKD for the costly, impactful disease that it is—the earlier we can diagnose someone with kidney disease the better their long-term outcomes.”

The study, which analyzed adults aged 18 years or older with CKD stages 1-5, used data from the 2011-2014 National Health and Nutrition Examination Survey and the CKD Epidemiology Collaboration (CKD-EPI) equation.  The higher estimate in the number of Americans affected by chronic kidney disease, versus statistics previously reported, is due to several factors including differences in study time frames, methodologies and populations, as well as an aging population and increased prevalence of risk factors such as diabetes and hypertension.

Kidney Disease Facts
30 million American adults are estimated to have chronic kidney disease—and most aren’t aware of it.  1 in 3 American adults are at risk for kidney disease.  Risk factors for kidney disease include diabetes, high blood pressure, heart disease, obesity and family history.  People of African American, Hispanic, Native American, Asian or Pacific Islander descent are at increased risk for developing the disease.  African Americans are 3 times more likely than Whites, and Hispanics are nearly 1.5 times more likely than non-Hispanics to develop end stage renal disease (kidney failure).
The National Kidney Foundation (NKF) is the largest, most comprehensive and longstanding organization dedicated to the awareness, prevention and treatment of kidney disease.  For more information about NKF visit www.kidney.org.