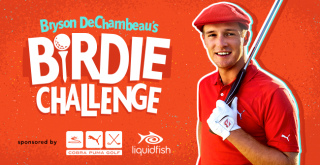 New York, March 29, 2017 - Bryson DeChambeau, a rising star on the PGA Tour, has joined forces with the prestigious National Kidney Foundation (NKF) Golf Classic to lead a special NKF Birdie Challenge during April - National Donate Life Month - to help raise funds to promote the need for this life-saving gift and to support kidney health.
The optimal treatment for kidney failure is kidney transplantation.  Studies show that the best-functioning, longest-lasting type of transplant comes from a living donor, and the waitlist for a kidney from a deceased donor is long.  In the United States, more than 100,000 people are waiting for a kidney transplant right now, approximately 18,000 will get transplanted this year, and 4,000 people will die waiting.  For DeChambeau, the numbers are much more than statistics.
“My father, Jon DeChambeau, has had diabetes for 27 years.  His kidneys failed, and he relied on lengthy dialysis treatments nearly every other day to simply stay alive,” Bryson DeChambeau said.  “On Wednesday, March 8, 2017, his life was changed when he received the gift of life – the donation of a kidney from a living donor, a high school friend.  That’s why I am proud to partner with the National Kidney Foundation and the Fresno Nephrology Kidney Foundation in my hometown to help raise funds for the promotion of organ donation and kidney health.”
The Birdie Challenge is a social media and web-based event in which DeChambeau will pledge to donate $250 per birdie and $500 per eagle that he makes on the PGA Tour during the month of April.  He also will challenge his social media followers and fans to make their own pledges and make a difference.  To make your Birdie Challenge pledge, visit Bryson DeChambeau Birdie Challenge.  You can join the conversation via the hashtag #NKFBirdieChallenge.  As an added boost and show of support, DeChambeau’s sponsors participating in the Birdie Challenge include Cobra Puma Golf and liquidfish. DeChambeau’s first Birdie Challenge event will be the Shell Houston Open, March 30-April 2; followed by RBC Heritage, April 13-16; the Valero Texas Open, April 20-23; and the Zurich Classic of New Orleans, April 27-30.
“We’re very excited that Bryson has teamed up with us and will use his talents to support the vital causes we champion every day,” said National Kidney Foundation CEO Kevin Longino, who received a kidney transplant 12 years ago.  “Of course, we wish Bryson the very best on Tour and encourage everyone to make their own Birdie Challenge pledge and meet or exceed his results!”
Hailing from Fresno, CA, DeChambeau, 23, recently began his first full season on the PGA Tour after a very successful amateur career.  He won the National Collegiate Athletic Association individual title and the U.S. Amateur Championship in the same year, 2015.  He is one of only five players in history to accomplish this feat, joining Jack Nicklaus, Tiger Woods, Phil Mickelson and Ryan Moore.  DeChambeau turned professional in April 2016 after tying for the 21st spot in the Masters Tournament and capturing his first victory as a professional at the 2016 Web.com Finals DAP Championship.  He also finished T-2 at the 2017 Puerto Rico Open. Learn more on his web site at www.brysond.com.
The NKF Golf Classic, a nationwide series of more than 30 golf tournaments held in major cities across the country, is The Premier Amateur Golf Event for Charity™ raising more than $3.5 million each year and exceeding $100 million to date.  Top finishing teams at each event earn an invite to the NKF Golf Classic National Finals at Pebble Beach, January 18-21, 2018.   For information about an upcoming NKF Golf Classic event near you visit www.nkfgolfclassic.org.
Kidney Disease Facts
1 in 3 American adults is at risk for kidney disease. 26 million American adults have kidney disease—and most aren’t aware of it. Risk factors for kidney disease include diabetes, high blood pressure, family history, and age 60+. People of African American; Hispanic; Native American; Asian; or Pacific Islander descent are at increased risk for developing the disease. African Americans are 3 ½ times more likely, and Hispanics 1 ½ times more likely, to experience kidney failure.

The National Kidney Foundation (NKF) is the largest, most comprehensive and longstanding organization dedicated to the awareness, prevention and treatment of kidney disease. For more information about the NKF visit www.kidney.org.