What’s Hiding in Our DNA? 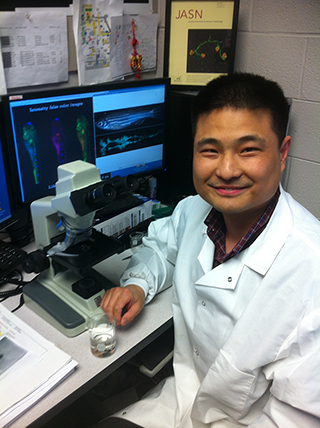 Dr. Zhou, 39, is an Assistant Professor in the Division of Pediatric Nephrology in the Department of Pediatrics and Communicable Diseases at the University of Michigan Medical School. Since 2006, he has studied the human genetics of inherited kidney diseases and believes that the key to understanding conditions such as nephrotic syndrome, focal segmental glomerulosclerosis and tubular interstitial nephritis may already be hiding in our DNA.

“With the advent of the new generation of DNA sequencing techniques, we have gained explosive knowledge of the genetic mutations underlying human kidney diseases,” said Dr. Zhou. “This opens new avenues for diagnosis and therapeutic interventions not only for inherited kidney diseases, but also acquired kidney diseases, including some forms of chronic kidney disease.”

Dr. Zhou’s previous research found that mutations in a DNA damage repair gene called FANCD2/FANCI-associated-nuclease 1, or FAN1, caused a rare kidney disease called karyomegalic interstitial nephritis. Now, Dr. Zhou and his team have started a new research project, supported by a Young Investigators Grant from the National Kidney Foundation, to investigate whether the same genetic mutations might cause other kidney diseases.

The investigation will examine DDR genes in CKD patients to try and find out whether bad mutations are present and/or found in higher concentrations than normal. If this is the case, it will demonstrate that defective DDR genes are associated with, and may cause, CKD. The research may also lead to a better understanding of why older adults are more prone to developing CKD, as it could be caused by genetic mutation in DDR genes.

Dr. Zhou and his team expect to complete their first experiments within a year, and hope to publish results within two years.

“Our goal is to discover new causes of chronic kidney diseases,” he said. “This will ultimately allow for the eventual development of therapies to protect kidney cells from DNA damage.“