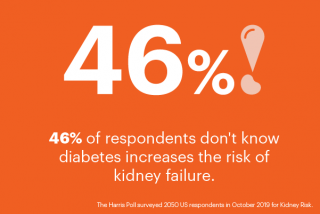 Diabetes raises risk of kidney disease and kidney failure, but many patients don’t realize the risk
New York, NY – November 14, 2019 - How much do American adults know about kidney disease and its relationship to diabetes? Not so much as it turns out, according to the results from a new online survey among more than 2,000 US adults, conducted by The Harris Poll and commissioned by the National Kidney Foundation (NKF).
Nearly half of Americans (46 percent), including some who have been diagnosed with diabetes, were not aware that having diabetes puts someone at greater risk for kidney failure, and nearly one third (31 percent) aren’t aware it also puts a person at greater risk of kidney disease. According to the Centers for Disease Control and Prevention (CDC), the two main causes of chronic kidney disease (CKD) are diabetes and high blood pressure. These two conditions were responsible for nearly 75 percent of kidney failure in 2014-2016.
“We must raise awareness among the American public that kidney disease is a dangerous, life-threatening condition that can be mitigated by early diagnosis and a proactive approach to maintaining kidney health,” said NKF Chief Executive Officer Kevin Longino, who is also a kidney transplant recipient. “Kidneys are vital organs. If your kidneys stop working, so do you.”
Nearly 3 in 10 Americans (29 percent), and more than 1 in 10 who have been diagnosed with diabetes by a medical professional (14 percent), do not believe or are unsure if having diabetes puts a person at greater risk of being diagnosed with kidney disease.
The CDC estimates that there are 37 million American adults with kidney disease today, yet most don’t know it. As many as 90 percent of those with kidney disease are unaware, according to the CDC estimates.
“The Harris Poll result shows that there are too many people at great risk who don’t know enough about this disease,” said Harris Poll CEO John Gerzema, who also serves as the Chair of NKF’s National Board of Directors. “We must increase our efforts to change that.”
NKF will use the data collected in this result and others toward part of its nationwide Kidney Risk® campaign launching in March 2020 to make sure all Americans know about the importance of kidney health, getting tested, and proactive measures to maintain kidney health. Today, on World Diabetes Day, a social media campaign will begin running until the end of November which raises awareness of the link between diabetes and kidney disease. The March 2020 campaign will also include risk factors such as high blood pressure, heart disease, obesity and family history of kidney disease.
“We want to eliminate preventable kidney disease and help those with the disease to live the most full, productive, and functional lives as possible,” Longino said.
The survey also found that 13 percent of Americans have been diagnosed with diabetes by a medical professional, with 10 percent diagnosed as Type 2 and 4 percent diagnosed as Type 1.
Further results showed that:
This poll, conducted for National Kidney Foundation, was made possible through a collaboration with Otsuka America Pharmaceutical, Inc.
Methodology
This survey was conducted online within the U.S. between October 23-25, 2019 among 2,050 U.S. adults age 18+ among whom 290 have ever been diagnosed with diabetes by a medical professional.  Results were weighted for age within gender, region, race/ethnicity, income, and education where necessary to align them with their actual proportions in the population. Propensity score weighting was also used to adjust for respondents’ propensity to be online. For complete survey methodology, including weighting variables and subgroup sample sizes, please contact info@kidney.org.
Kidney Disease Facts
In the United States, 37 million adults are estimated to have chronic kidney disease—and most aren’t aware of it.  1 in 3 American adults are at risk for chronic kidney disease.  Risk factors for kidney disease include diabetes, high blood pressure, heart disease, obesity and family history.  People of African American, Hispanic, Native American, Asian or Pacific Islander descent are at increased risk for developing the disease.  African Americans are 3 times more likely than Whites, and Hispanics are nearly 1.5 times more likely than non-Hispanics to develop end-stage renal disease (kidney failure).
About The Harris Poll
The Harris Poll is one of the longest running surveys in the U.S. tracking public opinion, motivations and social sentiment since 1963 that is now part of Harris Insights & Analytics, a global consulting and market research firm that delivers social intelligence for transformational times. They work with clients in three primary areas; building 21st-century corporate reputation, crafting brand strategy and performance tracking, and earning organic media through public relations research. Their mission is to provide insights and advisory to help leaders make the best decisions possible.  To learn more, please visit www.theharrispoll.com or follow Harris on Twitter and LinkedIn.
About NKF
The National Kidney Foundation (NKF) is the largest, most comprehensive, and longstanding patient-centric organization dedicated to the awareness, prevention, and treatment of kidney disease in the U.S. For more information about NKF, visit www.kidney.org.