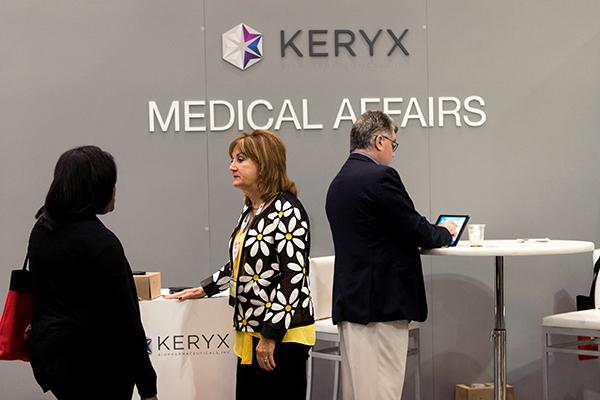 Keryx Biopharmaceuticals recognized for iron deficiency anemia treatment approved for early-stage chronic kidney disease patients
New York, NY—April 3, 2018—Keryx Biopharmaceuticals has been selected to receive the 2018 Corporate Innovator Award from the National Kidney Foundation (NKF) at its 27th annual Spring Clinical Meetings in Austin, Texas. In November 2017, Keryx Biopharmaceutical’s received expanded FDA approval of Ferric citrate (Auryxia) tablets to include the treatment of iron deficiency anemia in adult patients with chronic kidney disease who are not on dialysis, making it the only oral treatment option developed and approved specifically for these patients. Ferric citrate was originally approved in September 2014 for the control of serum phosphorus levels in adult patients with chronic kidney disease on dialysis.
“Iron deficiency anemia can negatively impact a patient’s quality of life and is associated with cardiovascular complications and increased mortality risk,” said Kevin Longino, CEO, National Kidney Foundation and a kidney transplant patient. “Keryx Biopharmaceutical’s innovative new treatment for iron deficiency anemia is an important therapy for kidney patients. The Corporate Innovator Award recognizes Keryx Biopharmaceutical’s significant contribution to improving the lives of people with kidney disease and we congratulate them on this achievement.”
In the U.S., one out of every seven adults have CKD. People with CKD often have anemia as a result of insufficient iron (called iron deficiency anemia) and do not produce enough hemoglobin, the component of the red blood cell that carries oxygen throughout the body.
“All of us at Keryx are dedicated to improving the care of people living with kidney disease and we are extremely proud and honored to be recognized with this award from the National Kidney Foundation,” said Greg Madison, CEO of Keryx Biopharmaceuticals.
The Corporate Innovator Award was established to recognize industry partners that advance the field of nephrology by addressing an unmet medical need, or improving upon an existing practice, therapeutic or technology. The award will be presented to Keryx Biopharmaceuticals during the National Kidney Foundation 2018 Spring Clinical Meetings in Austin, TX from April 10-14, 2018.
NKF Spring Clinical Meetings
For the past 27 years, nephrology healthcare professionals from across the country have come to NKF’s Spring Clinical Meetings to learn about the newest developments related to all aspects of nephrology practice; network with colleagues; and present their research findings. The NKF Spring Clinical Meetings are designed for meaningful change in the multidisciplinary healthcare teams’ skills, performance, and patient health outcomes. It is the only conference of its kind that focuses on translating science into practice for the entire healthcare team.
Kidney Disease Facts
30 million American adults are estimated to have chronic kidney disease—and most aren’t aware of it. 1 in 3 American adults are at risk for chronic kidney disease. Risk factors for kidney disease include diabetes, high blood pressure, heart disease, obesity and family history of kidney failure. People of African American, Hispanic, Native American, Asian or Pacific Islander descent are at increased risk for developing the disease. African Americans are 3 times more likely than Whites, and Hispanics are nearly 1.5 times more likely than non-Hispanics to develop end-stage renal disease (kidney failure).
About Keryx Biopharmaceuticals, Inc.
Keryx Biopharmaceuticals (NASDAQ: KERX), headquartered in Boston, Massachusetts, is focused on the development and commercialization of innovative medicines that provide unique and meaningful advantages to people with kidney disease. The Keryx team consists of approximately 200 committed people working with passion to advance the care of people with this complex disease. This dedication has resulted in two FDA-approved indications for Keryx’s first medicine, Auryxia® (ferric citrate) tablets. For more information about Keryx, please visit www.keryx.com.
About NKF
The National Kidney Foundation (NKF) is the largest, most comprehensive and longstanding organization dedicated to the awareness, prevention and treatment of kidney disease.  For more information about NKF visit www.kidney.org.