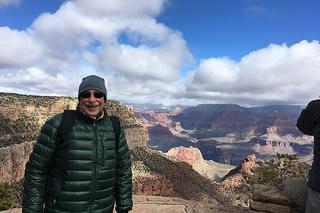 By Howard Kligerman
It’s been 10 years since I was diagnosed with Amyloidosis, a rare blood disease that caused my kidney failure. But thanks to a selfless living kidney donor, I’ve been granted a second chance to enjoy each day with my four grandchildren.
I’d been having symptoms for over a year before my illness was properly identified. My doctors may have been able to preserve my kidney function if they’d caught it sooner – but I wasn’t quite so lucky. As a very active and health-conscious person it was difficult to cope with my changing limitations. It was hard to do some of the things I loved; running, hiking, skiing and fishing. My partner Nance and I had just retired a year before and we had planned to travel. The timing seemed unfair, even cruel.
I also carried a lot of guilt about how my illness was affecting my family. Nance uprooted her life in Syracuse to be able to stay with me in Boston for nearly eight weeks while I received treatment, and our children routinely traveled great distances to be near me during this difficult time. That’s why, when my doctors urged me to ask a family member to become my living kidney donor, I repeatedly said no. I didn’t want to disrupt their lives in such a big way. After four years on the kidney transplant waitlist, I was really rolling the dice. It was a waiting game and there was no match for me in sight.

To help patients like me have these difficult conversations, NKF launched The Big Ask: The Big Give, a comprehensive public awareness initiative and series of workshops designed to make it easier for patients to find a living donor and get off the growing waitlist. Please don’t wait to make your special Donate Life Month contribution to support NKF programs like this one.

When Lori called me one afternoon to say that she was approved to donate her kidney in a paired exchange program, I was stunned. It’s such a spectacular gift – I still don’t really have words to describe how meaningful that was to me.

Thanks to Lori I was paired with an altruistic donor from Indiana, a woman who saw a billboard about living donation on the highway and knew it was her calling to save someone’s life. I received my transplant in June of 2013. And though I still had a challenging recovery ahead, it was such a relief to be free of dialysis treatments (which had truly become my part-time job).

Though it hasn’t always been second nature to consider asking others for help, I’ve certainly learned to be more open-minded when it comes to living donation. There are no guarantees in this life, and you never know what the answer might be if you don’t ask.
Read about Lori's story as a living organ donor!