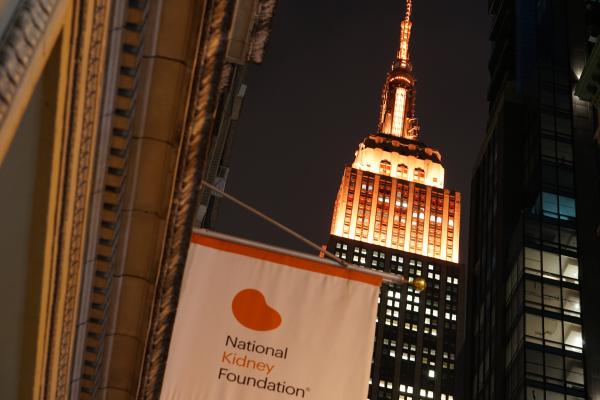 Expanded public awareness campaign relaunches for March, National Kidney Month
New York, NY—Thursday, March 8, 2018 — Today on World Kidney Day and throughout the month of March - National Kidney Month - the National Kidney Foundation (NKF) is reminding all Americans to “Heart Your Kidneys.”
More than 30 million American adults are estimated to have kidney disease, the 9th leading cause of death in the U.S., and growing in prevalence. To further raise awareness among the young and the young at heart, NKF has partnered with 10-year-old America’s Got Talent singer and kidney transplant recipient Angelica Hale. NKF and Angelica are advancing the “Heart Your Kidneys” public awareness campaign introduced last year to elevate knowledge about, and concern for, kidneys to the level of the body’s other, better-understood, vital organs such as the heart.
People also need to know that kidneys are the foundation for a healthy heart. Kidney healthy also is heart healthy, so when you “Heart Your Kidneys,” you also show love for your heart!  The number one cause of death in people with kidney disease is heart disease.
To commemorate World Kidney Day, iconic buildings and landmarks nationwide are turning orange, the signature color for kidney disease. This includes the top of the Empire State Building, which will be lighted in orange as night falls here in Manhattan.
At age 4, Angelica’s kidneys failed. Her mother, Eva Hale, donated one of her own kidneys to her daughter to save her life. Today, both mother and daughter are healthy. Angelica’s story is a reminder that when your kidneys stop working, so do you. Dialysis or a transplant is needed just to stay alive.
“Eat right, exercise, drink water, and keep your kidneys healthy, because whatever you’re good at, there’s only one you,” said Angelica as part of a new series of “Heart Your Kidneys” video public service announcements she recorded for NKF. Also, earlier this week, Angelica became NKF’s newest face of kidney advocacy on Capitol Hill during this year’s Kidney Patient Summit in Washington, D.C., where she helped support key NKF legislative priorities.
NKF urges anyone with diabetes, hypertension, or a family history of kidney disease to speak with their doctor this month, or anytime, and ask about taking the two simple tests to check their kidney health. Even if a person inherits kidney disease, they may be able to slow its progression with lifestyle changes. Join the conversation, and help raise awareness on social media by looking for and posting the #HeartYourKidneys hashtag.
Kidney Disease Facts
30 million American adults are estimated to have chronic kidney disease—and most aren’t aware of it. 1 in 3 American adults are at risk for chronic kidney disease. Risk factors for kidney disease include diabetes, high blood pressure, heart disease, obesity and family history of kidney failure. People of African American, Hispanic, Native American, Asian or Pacific Islander descent are at increased risk for developing the disease. African Americans are 3 times more likely than Whites, and Hispanics are nearly 1.5 times more likely than non-Hispanics to develop end-stage renal disease (kidney failure).
The National Kidney Foundation (NKF) is the largest, most comprehensive and longstanding organization dedicated to the awareness, prevention and treatment of kidney disease. For more information about NKF visit www.kidney.org.