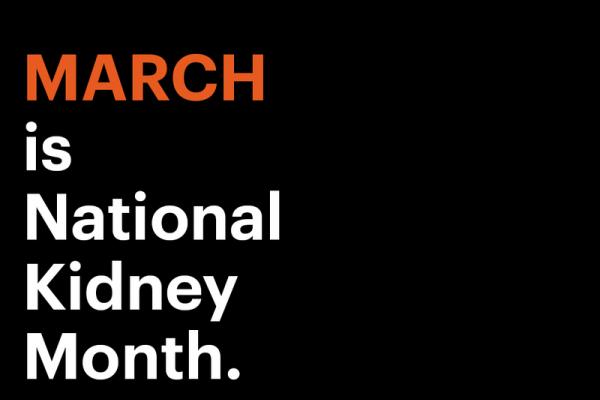 New Phase of the “Are You the 33%?” Campaign Empowers People to Take Action

March 1, 2021, New York, NY — In honor of National Kidney Month which starts today, the National Kidney Foundation's (NKF) national public awareness campaign, "Are You the 33%?” enters a new phase focusing on the connection between type 2 diabetes (T2D) and kidney disease, also known as chronic kidney disease (CKD). NKF urges everyone to find out if they’re the 1 in 3 at risk for developing kidney disease by taking a one-minute quiz at MinuteForYourKidneys.org.

Diabetes is a leading risk factor for developing kidney disease. Over time, having high blood sugar from diabetes can cause damage inside your kidneys. But it doesn’t have to end up this way; because with careful control of glucose (sugar) levels, there is evidence that you can prevent kidney disease in people with diabetes.

Award-winning actress, Debbie Allen joined the campaign as the T2D Campaign Celebrity Spokesperson in February, Black History Month, to help promote awareness of diabetes as a leading cause for developing chronic kidney disease. Allen has a family history of diabetes and was recently diagnosed with pre-diabetes. On March 11th, World Kidney Day, people with T2D will have a unique opportunity to attend a virtual fireside chat to hear Debbie Allen’s personal story first-hand. Allen will be joined by NKF’s Chief Medical Officer, Dr. Joseph Vassalotti and a patient advocate with T2D and chronic kidney disease. Participants will have the opportunity to ask the speakers their own questions via a chat function. See registration details. Note this event is not open to media.

“Millions of adults in the U.S. are walking around with kidney disease and don’t even know it. And if you have type 2 diabetes you are at increased risk for developing kidney disease,” said Kevin Longino, CEO of National Kidney Foundation and a kidney transplant patient. “Having kidney disease also puts you at greater risk of developing life-threatening complications from COVID-19, so it’s really important that people go to our one minute quiz and find out about their kidney health.”

People of certain racial and ethnic groups are more likely to develop kidney disease than others. Blacks or African Americans are 13 percent of the U.S. population, but represent 35 percent of those with kidney failure. Hispanics or Latinos are 1.3 times as likely as non-Hispanics/Latinos to develop kidney failure. A leading cause of kidney disease is diabetes which is more prevalent in these communities. Everyone needs to know about kidney disease, but especially if you have any one of these additional risk factors: high blood pressure, heart disease, obesity, and family history of kidney disease.

“With 1 in 3 adults in the U.S. at risk for developing kidney disease, we must urgently transform understanding risk into taking actions to protect kidney health,” said Joseph Vassalotti, M.D., Chief Medical Officer at the NKF. “We want to help millions of Americans who have type 2 diabetes – those at highest risk for developing kidney disease – by encouraging them to talk to their doctors to learn if testing and other treatments are right for them.”

The “Are You the 33%?” campaign urges T2D patients and everyone with a risk factor to learn more by taking a simple, one-minute online quiz at MinuteForYourKidneys.org.  The campaign microsite is available in both English and Spanish at MinuteForYourKidneys.org. Patients should also ask their doctors about two simple tests to diagnose kidney disease: a specific urine test, called uACR, and a calculated blood test, called eGFR.

In addition, Healthy.io, the creator of smartphone urinalysis, is partnering with the NKF to offer its home urine albumin-to-creatinine ratio (uACR) test kit, free of charge, to people with type 2 diabetes who are at increased risk for developing kidney disease. Take the one-minute quiz at MinuteForYourKidneys.org.