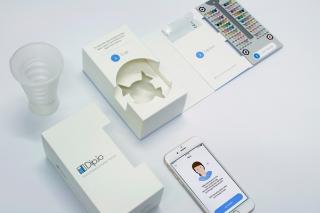 Clinical trial released after nearly 1,000 people participated
New York, NY -- February 7, 2019 -– A clinical trial that followed nearly 1,000 people using a new home test for chronic kidney disease (CKD) shows a high percentage of the participants were happy with the process and preferred it to getting tested in a doctor’s office.
The National Kidney Foundation (NKF), Geisinger and Healthy.io evaluated smartphone home testing for CKD. Patients with hypertension – a major risk factor for CKD – that had not been tested in the previous 12 months were given the option of using a smartphone urinalysis test at home and the results were impressive.
Of the participants that received a kit, 71 percent adhered to testing, 98 percent of patients who attempted a home test succeeded, and 89 percent stated they prefer home testing over testing at the physician’s office. Among patients who completed home testing mean score for whether they would recommend home urine testing to a friend or colleague was 8.9/10 (i.e. Net Promoter Score of 62).
Despite current guidelines that recommend CKD testing yearly for adults with diabetes and/or hypertension, less than 10 percent of those with hypertension and less than 40 percent of those with diabetes are currently completely assessed.
“Albuminuria is often the earliest sign of kidney disease, and yet, in the majority of people at increased risk due to diabetes or hypertension, it is not tested,” said Kerry Willis, PhD, NKF Chief Scientific Officer. “This new test has the potential to help millions of patients find out they have CKD while there is still time to prevent progression to kidney failure.”
About 30 million American adults are affected by CKD, but nearly 90 percent don’t know they have this life-threatening illness. Early intervention can slow the progression of the disease, which can be deadly if not caught in its early stages.
The trial investigators were Julie Leddy; Christina Yule; Elisabeth Graboski; Jamie Green, MD; Juli Molecavage, DHA, MHA; and Alex R. Chang, MD, MS, all from Geisinger; and Josef Coresh, MD, of Johns Hopkins University.
The investigators concluded that the use of the mailed, smartphone kits may offer an additional modality to improve compliance with albuminuria screening and may be preferable for some patients.
The trial, which began in April:
Overall, the intervention increased proteinuria screening completion by (28.9% vs. 18.0%; p<0.001).
There was no difference in the proportion of the detected albuminuria cases between the intervention and control groups.
“The home testing was very well-received and easy to do for patients,” Dr. Chang said. “Important limitations of this study were that we required patients to consent by telephone before sending testing kits. Also, few patients who had abnormal urinalysis findings went to the clinic lab for their confirmation testing in the three-month follow-up period. Future research should evaluate optimal screening and confirmation testing strategies-all completed at the comfort of home.”
NKF provided the funding for the trial and the Geisinger Institutional Review Board approved the research study.
Kidney Disease Facts
In the United States 30 million adults are estimated to have chronic kidney disease—and most aren’t aware of it.  1 in 3 American adults are at risk for chronic kidney disease.  Risk factors for kidney disease include diabetes, high blood pressure, heart disease, obesity and family history.  People of African American, Hispanic, Native American, Asian or Pacific Islander descent are at increased risk for developing the disease.  African Americans are 3 times more likely than Whites, and Hispanics are nearly 1.5 times more likely than non-Hispanics to develop end stage renal disease (kidney failure).
About Geisinger
One of the nation’s most innovative health services organizations, Geisinger serves more than 1.5 million patients in Pennsylvania and New Jersey. The system includes 13 hospital campuses, a nearly 600,000-member health plan, two research centers and the Geisinger Commonwealth School of Medicine. Geisinger is known for its focus on caring and innovative programs including the ProvenCare® best-practice approach to maximize quality, safety and value; ProvenHealth Navigator® advanced medical home; Springboard Health® population health program to improve the health of an entire community; ProvenExperience™ to provide refunds to patients unhappy with their care experience; and Geisinger’s MyCode® Community Health Initiative, the largest healthcare system-based precision health project in the world. With more than 215,000 volunteer participants enrolled, MyCode is conducting extensive research and returning medically actionable results to participants. A physician-led organization, with approximately 32,000 employees and more than 1,800 employed physicians, Geisinger leverages an estimated $12.7 billion positive annual impact on the Pennsylvania and New Jersey economies. Repeatedly recognized nationally for integration, quality and service, Geisinger has a long-standing commitment to patient care, medical education, research and community service. For more information, visit www.geisinger.org, or connect with us on Facebook, Instagram, LinkedIn and Twitter.
About Healthy.io
Healthy.io is transforming prevention for kidney disease for the millions of patients who fall through the cracks of the existing, centralized system. Having created a new category of smartphone urinalysis that can replace the centralized lab device, the company offers a full service that addresses the staggering cost and burden of CKD. With an ‘adherence as a service’ offering, patients get a test kit sent home and results are automatically transmitted to their medical record for physician review. Patients can test themselves at their own convenience, detect the disease early and get the care they need.  In Israel and Europe, Healthy.io’s digital urinalysis pathways are already a reality for over 100,000 patients.
The National Kidney Foundation (NKF) is the largest, most comprehensive, and longstanding patient-centric organization dedicated to the awareness, prevention, and treatment of kidney disease in the U.S. For more information about NKF, visit www.kidney.org.