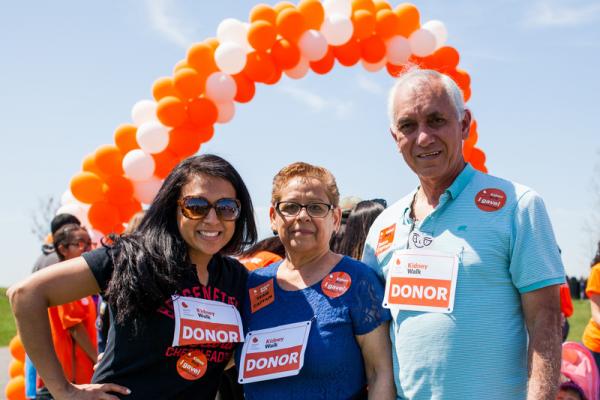 Today, nearly 100,000 patients are waiting for a life-saving kidney, but lost wages are a barrier for potential donors. Of the 24,670 transplants performed in 2021, living donors accounted for over 20% (or 5,971) of kidney transplants. Living organ donationrequires a typical leave of absence of approximately four weeks (ranging from two-to-eight weeks) for a kidney donor, but longer for a living liver donor. The minimum proportion of wage support is 80%, though companies may elect to support more.

“Every day 12 people die on the waitlist,” said Kevin Longino, Chief Executive Officer of NKF and a kidney transplant recipient. “We need to rip down every possible barrier to becoming a living donor, and employers who join the Circle of Excellence are doing just that. By supporting those willing to help others struggling with life-threatening illness and helping to reduce any financial burden from living donation, employers can actively promote access to transplantation for all.”

To be a part of the Circle of Excellence, employers can take action to support living donation by implementing policies that provide salary support for employees who choose to be a living organ donor. Member employers may also offer financial support to employees in need of an organ transplant but whose living donor faces a loss of income during the recovery period. Additional donor support is at the employer’s discretion. Many members of the Circle of Excellence may also opt to support travel, lodging, childcare, or other expenses incurred by living donors.

Currently, there are 73 members of the Circle of Excellence throughout the U.S. and Canada.  For the 73 Circle of Excellence member employers, their HR policies will cover 1.8 million employees if they would choose to engage in the benefit. Of the 1.8 million employees, 39 have used the benefit and received financial support because they decided to be a living donor.

John Gill, MD, President of the American Society of Transplantation said, “The Circle of Excellence gives employers the opportunity to be heroes to their employees. A living donor’s gift is life-saving for patients in need of a kidney or liver transplant and has a huge positive impact on society. Patients facing life-threatening diseases can live normal lives, raise their families, and participate in their communities. By supporting living organ donors, we are also building stronger communities.”

The Circle of Excellence celebrates employers breaking down financial barriers to living donation with member benefits and recognition throughout the year at NKF and AST public events. Additional member benefits include:

Learn more about the Circle of Excellence, NKF and AST and consider joining an elite recognition program minimizing barriers to living organ donation. Follow us on social with the hashtag, #livingdonorcircle.

In the United States, 37 million adults are estimated to have kidney disease, also known as chronic kidney disease (CKD)—and approximately 90 percent don’t know they have it.  1 in 3 adults in the U.S. are at risk for kidney disease.  Risk factors for kidney disease include: diabetes, high blood pressure, heart disease, obesity, and family history. People of Black/African American, Hispanic/Latino, American Indian/Alaska Native, Asian American, or Native Hawaiian/Other Pacific Islander descent are at increased risk for developing the disease. Black/African American people are more than 4 times as likely as White people to have kidney failure.  Hispanics/Latinos are 1.3 times more likely than non-Hispanics to have kidney failure.

About the American Society of Transplantation