Update
As part of the Advancing American Kidney Health initiative, on December 17, 2019, the Administration took historic action to improve patient access to transplantation by increasing the number of organs available for transplant. Read NKF’s press statement on the announcement and our summaries of specific proposed changes on increasing deceased donation and supporting living donors. Read the comments here and here.
On July 10, 2019, the President launched the Advancing American Kidney Health Initiative at an event in Washington, DC, taking the largest steps forward in U.S. kidney care since the end-stage renal disease (ESRD) program began in 1973. The National Kidney Foundation (NKF) brought over thirty patients, families, and providers to Washington, DC to be part of the historic announcement.
During the event, the President signed an Executive Order that directs the Department of Human Services (HHS) to take bold action to transform how kidney disease is prevented, diagnosed, and treated within the next decade. NKF worked closely with the administration to develop the Initiative's priorities and strategy, as outlined in NKF's kidney policy blueprint here. NKF's CEO, Kevin Longino, himself a kidney patient and transplant recipient, stood with the president on stage as he signed the Executive Order, signaling NKF's partnership in this new vision for kidney care in the US.
Read on to learn more about the Advancing American Kidney Health initiative; watch a recording of the event, learn about the specific actions HHS will be taking to drive progress and get involved! 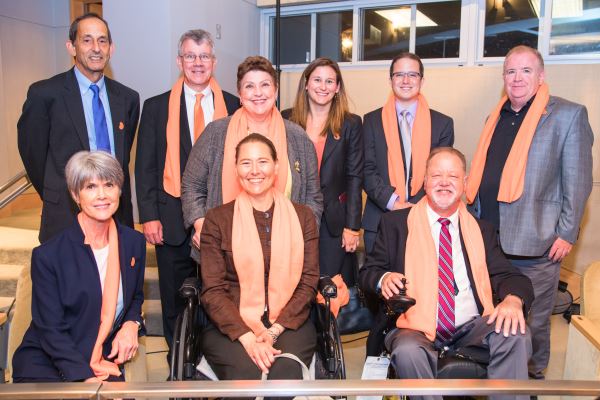 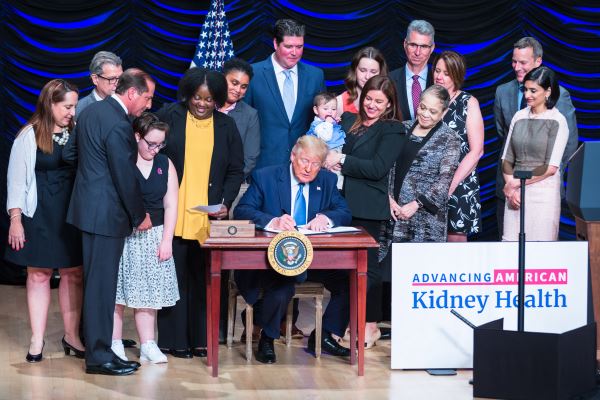 President Donald Trump signs the Executive Order on Advancing American Kidney Health. He is joined by patients and families from across the country, Secretary of the Department of Health and Human Services (HHS), Alex Azar, Administrator of the Centers for Medicare & Medicaid Services (CMS), Seema Verma, and NFK CEO and transplant recipient, Kevin Longino.

Watch a Recording of the Event

Read NKF's summaries of the Advancing American Kidney Health Initiative.
View a visual summary of the initiative & its provisions here.
Hear more about what the announcement meant to some of NKF's incredible advocates on the Advocacy in Action blog.

Take action on behalf of kidney patients here.
Learn more about getting involved with NKF's Kidney Advocacy Committee, our patient engagement and advocacy program, here.
Keep up with the latest news on the Advancing American Kidney Health Initiative by following NKF's Advocacy Twitter account, our Advocacy in Action blog, or by seeing what's new in the NKF newsroom.