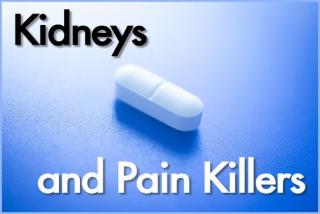 One of the most difficult aspects of any chronic disease is the pain that typically accompanies it. For those struggling with kidney disease, this difficulty is compounded by the effect pain killers have upon kidney function. Along with continuing research, fund raising, car donation, and following your doctor’s health plan, it’s important to know the correct way to use painkillers to preserve your health.

There are three main types of painkillers widely used in prescription and over-the-counter drugs:

All three are effective at relieving pain, though they work better for different kinds of pain and have different side effects and contra-indications for those with kidney disease.

NSAIDS, or non-steroidal anti-inflammatory drugs, include such common pain killers as ibuprofen, diclofenac, naproxen sodium, and aspirin. These work by inhibiting the production of cyclo-oxygenase, or COX enzymes. COX enzymes are responsible for the production of prostaglandin, which is what causes inflammation at the site of wounds in the body.

NSAIDS are not typically recommended for patients with kidney disease, with the exception of small doses of aspirin. "Baby" aspirin, or a low enough dose to thin the blood and help reduce heart attack, has not been shown to be unsafe for kidney patients. If your doctor has prescribed aspirin for your heart, be certain that he or she is well aware of your kidney issues and confirm that the aspirin is safe for you to take.

Heavy use of high doses of aspirin, ibuprofen, and naproxen can lead to kidney disease called chronic interstitial nephritis and eventual kidney failure. Discuss any NSAID use with your doctor and kidney specialist.

Paracetamol is most commonly known as acetaminophen, you’d recognize it by the brand name Tylenol, and is the most commonly used analgesic in America. The exact science of how paracetamol works is still unknown, but it is believed that it affects COX enzymes in the brain and spinal cord. It can be used to reduce fevers, but it does not have anti-inflammatory properties.

Acetaminophen is typically the safest painkiller available for use by kidney disease patients but should still be used under supervision by a doctor. Overuse of paracetamol can lead to liver failure.

Opioids refer to analgesic drugs that attach themselves to opioid receptors in the brain and spinal cord, giving a morphine-like pain relief, including sleepiness, euphoria, and anesthetizing effects. These drugs are similar to morphine, which is derived from the opium poppy itself, and include synthetic opioid derivatives such as hydrocodone and oxycodone. Opioids are only available in the United States by prescription and are highly regulated because of their addictive side-effects. These drugs are typically used only after surgery or for severe chronic pain associated with long-term illness. It is likely that a kidney patient would only be prescribed an opioid for palliative care or following surgery.

There are a few things you can do to ensure that you are using analgesic medicines properly.