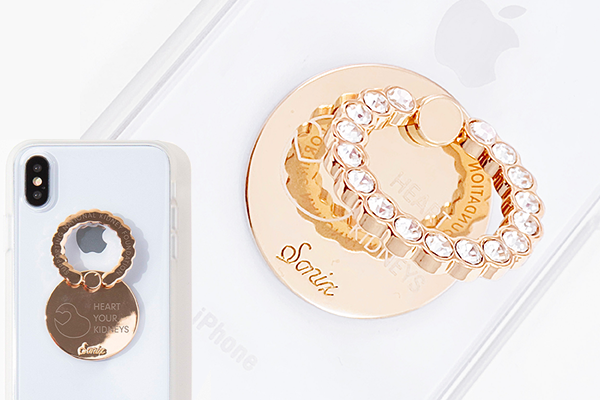 Nationwide sale of rhinestone phone ring and stand raising funds and
awareness of living kidney donation ahead of holiday season
New York, NY – November 1, 2019 – Los Angeles-based Sonix, maker of popular and stylish tech accessories sold across the globe, has joined forces with the National Kidney Foundation (NKF) for a consumer awareness and fundraising campaign, Sonix X NKF.  The purpose: To bring more attention to the overall importance of kidney health and renewed focus to the urgent need for increasing the number of living kidney donors. There are nearly 100,000 Americans on the wait list for a kidney transplant.
Sonix has produced a special-edition, mobile phone rhinestone ring and stand etched with NKF’s signature “Heart You Kidneys” logo. The co-branded ring, which can be worn around the index or third finger to hold the phone or double as a kickstand to prop the phone on a flat surface, is being sold nationwide at participating AT&T stores and online, with 20 percent of net proceeds to benefit NKF through October 2020. The ring comes attached to a keepsake card and phone case insert that features quick, critical facts, including that more than 726,000 Americans have irreversible kidney failure and need dialysis or a kidney transplant just to stay alive – because if your kidneys stop working, so do you!
Touting the theme “Giving Has a Nice Ring to It,” the Sonix X NKF campaign is timed to take advantage of the holiday season. The eye-catching, fashionable phone ring accessory is an ideal stocking stuffer or gift for nearly any occasion. “We are proud that Sonix is partnering with us and using their product to help raise much-needed awareness about kidney disease and kidney transplantation,” said Kevin Longino, CEO of NKF a kidney transplant patient. “It’s fun and stylish, and we appreciate most that it was made with the intention to help us to save lives and raise funds among its extensive customer base.”
For Sonix, collaborating with NKF allows the trend-setting company to offer the phone ring as another of its many, useful creations that often incite “Where-did-you-get-that?” moments among its loyal, fashion-forward followers – yet for a vital cause. It also provides a unique opportunity to give back through a portion of product sales and highlight kidney health to its predominantly female and young customer base. Women are more pre-disposed to kidney disease due to a number of factors, such as increased blood pressure during pregnancy. Also, anyone of any age, race or ethnic background can develop kidney disease. Following a healthy diet, exercising and using less salt can help slow its progression.
“Sonix is thrilled to be partnering with National Kidney Foundation and AT&T to help raise awareness for kidney health and the urgent need for kidney donations,” says Jeff Tsai, co-founder of Sonix. “Sonix had experienced the impact of kidney disease through one of our longtime employees. As a result, we’ve learned firsthand the urgent need to raise awareness – particularly among a younger, female demographic like ours.”
Sonix will support the cause campaign on its Instagram and Facebook channels by promoting the phone ring to its supporters, including celebrities and influencers, and encourage them to repost and share with their own followers. One promotion is a sweepstakes encouraging consumers to tag their best friend in a comment and share a photo with their best friend – for a chance to win two rings to gift to a friend, to symbolize the act of giving, and in support of living kidney donation. Sonix also will remind the public that “Giving Has a Nice Ring to It” when supporting NKF by asking its social media followers to make purchases on Giving Tuesday.
About Sonix
Since 2010, Sonix has been making everyday must-haves essentials into unexpected cult favorites. Our pieces are seen all over the world on stylespotters ready to take on the world. As the creator of the original "pretty and protective" phone cases, Sonix is known for making unique and impactful products that protect, keep, assist, accessorize and beyond. Today, Sonix can be found in over 20,000 retailers worldwide and in the hands of stylesetters everywhere.
Kidney Disease Facts
In the United States, 37 million adults are estimated to have chronic kidney disease (CKD) – and most aren’t aware of it. 1 in 3 American adults is at risk for CKD. Risk factors for kidney disease include diabetes, high blood pressure, heart disease, obesity, a family history of kidney failure, and being age 60 or older. People of African American, Hispanic, Native American, Asian or Pacific Islander descent are at increased risk for developing the disease. African Americans are about 3 times more likely than Whites to develop end-stage kidney disease (ESKD or kidney failure). Compared to non-Hispanics, Hispanics are almost 1.3 times more likely to receive a diagnosis of kidney failure.
Depending on where a patient lives, the average wait time for a kidney transplant can be upwards of three to seven years. Living organ donation not only saves lives, it saves money!
About National Kidney Foundation Living Organ Donation Resources
THE BIG ASK: THE BIG GIVE platform is designed to increase kidney transplantation and living donation. It includes in-person trainings, direct patient and caregiver support through our toll-free help line 855.NKF.CARES (855.653.2273), peer mentoring from a fellow kidney patient or a living donor, online communities, an advocacy campaign to remove barriers to donation, and a multi-media public awareness campaign.