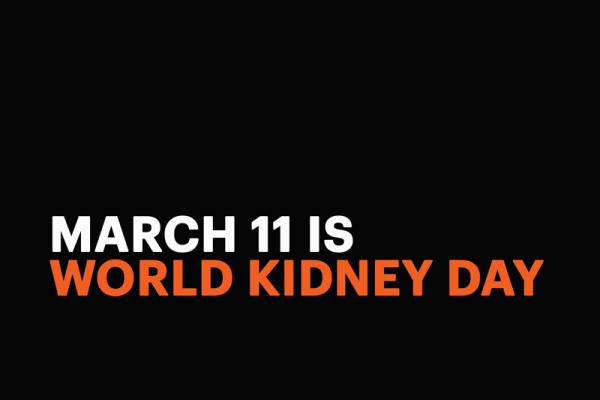 March 11, 2021, New York, NY — In honor of World Kidney Day on Thursday, March 11, the National Kidney Foundation's (NKF) national public awareness campaign "Are You the 33%?”, asks all Americans to take action with a simple, one-minute quiz at MinuteForYourKidneys.org to find out if they’re at risk for kidney disease. The campaign, originally launched in March 2020, now includes a new joint initiative launched with Bayer and award-winning actress Debbie Allen which focuses on the connection between type 2 diabetes (T2D) as a leading cause of kidney disease, also known as chronic kidney disease (CKD). This campaign aims to empower people to know their kidney risk, understand the importance of managing their blood sugar for good kidney health, and talk to their doctors about diabetes and kidney disease. To further commemorate World Kidney Day 2021, landmarks and buildings nationwide will “turn orange,” the signature color for kidney disease.

In addition, today, people with T2D will have a unique opportunity to attend a virtual Fireside Chat at 8AM PT/11AM ET to hear Debbie Allen’s personal story first-hand. Allen will be joined by NKF patient advocate Jeff Dawson, who is living with CKD and T2D, and NKF’s Chief Medical Officer, Dr. Joseph Vassalotti. Participants will have the opportunity to ask the speakers questions via a chat function. Registration details can be found here.

“Today we observe World Kidney Day, a day to build awareness about the importance of understanding your kidney health, as well as reducing the impact of kidney disease globally,” said Kevin Longino, Chief Executive Officer of NKF and a kidney transplant patient. “Everyone needs to know about kidney disease, but especially if you have any one of the five risk factors – diabetes, high blood pressure, heart disease, obesity or a family history of kidney disease. Knowing you’re at risk is the first step towards living a healthier life.”

Throughout the month of March, CVS Kidney Care is promoting this important message through social media and within their pharmacy locations.

Healthy.io, the creator of smartphone urinalysis, is partnering with NKF to offer its home urine albumin-to-creatinine ratio (uACR) test kit, free of charge, to people with type 2 diabetes who are at increased risk for developing kidney disease.

Blacks or African Americans are 13 percent of the U.S. population, but represent 35 percent of those with kidney failure. Hispanics or Latinos are 1.3 times as likely as non-Hispanics/Latinos to develop kidney failure. Diabetes is a leading cause of kidney disease as well as high blood pressure. Both are more prevalent in these at-risk communities. Everyone needs to know about kidney disease, but especially if you have any one of these additionalrisk factors: heart disease, obesity, and family history of kidney disease. Take the one-minute quiz available in English and in Spanish at MinuteForYourKidneys.org.

Funding and/or support for the campaign was provided to the National Kidney Foundation by the following: CVS Kidney Care, Healthy.io, AstraZeneca, Bayer, Otsuka America Pharmaceutical, Inc., and Tricida.