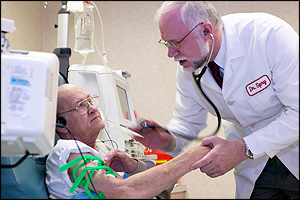 The chances of losing one's mental faculties with age are increased in older adults with chronic kidney disease, according to two research reports in the August issue of American Journal of Kidney Diseases, the official journal of the National Kidney Foundation.

The good news is that there are medications that decrease albuminuria or protein in the urine, one of the earliest signs of kidney disease, and therefore may prevent or delay cognitive decline.

Abnormalities in the capillaries, which are the smallest blood vessels in the body, are found in the brains of people who die of dementia. Similar capillary findings are observed in kidneys of people with albuminuria, leading scientists to predict that albuminuria and vascular disease of the brain may go hand in hand.

"Persistent albuminuria means that the kidney has some damage and is starting to spill some albumin -- a kind of protein -- into the urine," said Dr. Kerry Willis, Senior Vice President for Scientific Activities, National Kidney Foundation. The most common causes of albuminuria are diabetes and high blood pressure.

As part of the Cardiovascular Health Cognition Study, more than 2000 people over the age of 65 years underwent testing of their memory and thinking skills, and they gave urine samples to measure levels of albumin.

Test results showed that 15% of the subjects had cognitive impairment, a condition in which memory or other cognitive domains are below normal without interfering with daily functioning. Twelve percent had dementia, defined as a deterioration of intellectual faculties, such as memory, concentration, and judgment, severe enough to interfere with social or occupational functioning. Mild cognitive impairment is considered to be a transitional phase between normal cognitive function and dementia.

People with albuminuria were about 50% more likely to have dementia than people without albuminuria, Dr. Joshua I. Barzilay, at Emory University School of Medicine in Atlanta, Georgia, and his research team report. The association between the two conditions was still strong after controlling for age, education and risk factors, such as high blood pressure, diabetes, smoking, and cholesterol levels. There was a weaker relationship between albuminuria and mild cognitive impairment.

These findings imply that "albuminuria increases the likelihood that dementia is present or will develop," Dr. Barzilay and his associates write.

However, if albuminuria is caught and treated early, the brain may possibly be protected from damage due to kidney disease. Drugs commonly used to treat high blood pressure, called ACE inhibitors and angiotensin-receptor blockers, may also have a protective effect on the kidneys.

Researchers led by Dr. Manjula Kurella-Tamura, at the University of California in San Francisco, conducted a similar study to examine the effects of reduced kidney function on cognitive impairment. More than 23,000 people over the age of 45 were evaluated with a cognitive screening test. Kidney function was based on estimated glomerular filtration rate, a measure of the kidneys' ability to filter and remove waste products.

The odds of having reduced cognitive ability were increased by 23% among individuals with chronic kidney disease, Dr. Kurella-Tamura's group observed. More advanced stages of kidney disease were associated with even higher risk of poor mental functioning.

Even those with near-normal kidney function were at increased risk, suggesting that "impairment may occur earlier in the course of kidney disease than previously recognized," the authors maintain.

Treatment of kidney disease and other related health problems, such as diabetes and heart disease, can be complicated, requiring several medications to keep symptoms in check and to prevent these conditions from worsening, Dr. Daniel E. Weiner points out in an editorial in the same issue of the American Journal of Kidney Diseases.

It may be that, by treating kidney dysfunction in its earliest stages, patients will remain cognitively intact and, therefore, better equipped to follow their doctors' recommendations for staying healthy.