Say No to That Diet Soda? 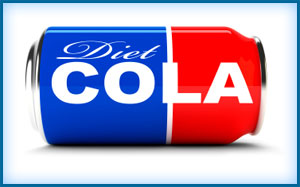 An important new finding has been reported from the Nurses' Health Study, which is a long term study that found that diets high in sodium (salt) were hard on the kidneys, and gave other information about heart disease, cancer risk factors, and the use of hormone treatments after menopause.

Now doctors conducting this study have reported that drinking a lot of sugar-free cola beverages or other carbonated soft drinks might have effects on health. Kidney health may be one of those things. Kidney function declined over two decades in women who drank several diet sodas a day, according to researchers from the prestigious Nurses' Health Study. In fact, compared with women who did not drink diet soda, soda-drinking women had a 30% greater reduction in kidney function in 20 years. More than 3,000 women (all nurses) have participated in the study for 20 years or more; now the women's median age is 67 years.

At the start of the study, all the women had healthy kidney function, according to Julie Lin, MD, MPH, assistant professor of medicine at Harvard Medical School and a physician at Brigham and Women's Hospital.

Drinking one diet soda daily did not decrease kidney function more than normal. Drinking two or more diet sodas, though, appeared to cause problems.

There was no connection between sugar-sweetened beverages and a decline in kidney function. Since most participants in the Nurses' Health Study were white women, the investigators said that these results might not apply to men or to women of other ethnic groups.

Even when the researchers accounted for other health factors, the link between diet sodas and kidney function persisted. They looked at age, obesity, high blood pressure, diabetes, smoking, physical activity, caloric intake and cardiovascular disease.

With some 37 million Americans suffering from chronic kidney disease, it is a major public health problem. The study with the nurses will have to be confirmed by other studies. But in the meantime, water may be the best thing to drink.