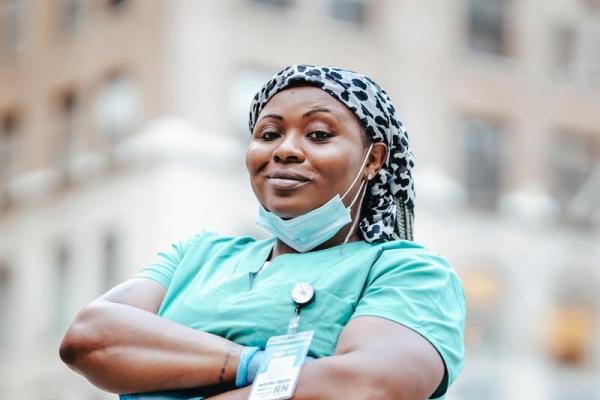 Feb. 3, 2022, New York, NY — The National Kidney Foundation (NKF) is excited to celebrate Black History Month by highlighting the health equity initiatives accomplished throughout the year such as the formation of NKF’s first-ever Health Equity Advisory Committee (HEAC) reaching its one-year anniversary and the recommendation for a race-free approach to eGFR (estimated glomerular filtration rate), which is an equation that determines a patient’s level of kidney function. People living with kidney disease, particularly those who identify as Black or African American, need to be aware that this new race-free equation may have an impact on their kidney disease care.

Kidney disease is a public health crisis that affects an estimated 37 million adults in the U.S. and can lead to life-threatening kidney failure. Approximately 90% of those with the disease don’t even know they have it until it has progressed to the critical late stages. People of Black or African American, Hispanic or Latino, American Indian or Alaska Native, Asian American, or Native Hawaiian or Other Pacific Islander descent are all at increased risk for developing the disease. For example, Black or African American people comprise 13% of the U.S. population but represent 35% of those with kidney failure, treated with dialysis, or kidney transplantation.

A joint task force was formed between NKF and the American Society of Nephrology (ASN) to evaluate various approaches that would remove race from the old equation. The task force recommended the adoption of the new eGFR 2021 CKD-EPI creatinine equation without a race variable as well as increased use of cystatin C combined with serum (blood) creatinine, as a confirmatory assessment of GFR or kidney function. NKF and ASN affirm that race is a social construct, not a biological one so using race as a factor for estimating kidney function is not an acceptable approach. This shift in approach reflects a broader call to re-examine institutional policies and practices and to identify potential areas of health inequities and disparities.

“We’re committed to seeing all labs and healthcare providers standardize on the use of this race-free approach, one that the NKF-ASN Joint Task Force worked together on for 10 months with considerable input from hundreds of patients and family members, medical students and trainees, clinicians, scientists, health professionals, and other public stakeholders,” said Kevin Longino, CEO of the NKF and a kidney transplant patient. “Although this new equation is only one first step in addressing the health inequalities present in healthcare today, this new race-free equation provides an unbiased, standardized approach for all laboratories in the United States to diagnose kidney diseases.”

A Laboratory Engagement Initiative Workgroup comprised of NKF in collaboration with the American Society of Clinical Pathology, the laboratory community, and clinical laboratory societies have developed content and tools aimed at advancing an earlier diagnosis of kidney disease and urged improvements in kidney disease laboratory testing.

As the HEAC celebrates its one-year anniversary, this 13-member team continues to support, direct, and champion NKF’s health equity initiatives, community health, and social justice efforts through research, education, and key partnerships. This committee worked collaboratively throughout the year with kidney patients, other NKF committees, as well as board members, and NKF staff to advise in the design, implementation, and evaluation of numerous programs that support stronger, healthier communities. Some of the HEAC accomplishments throughout the year included:

NKF encourages all Americans to stay informed on how to achieve optimal kidney health and if you have kidney disease and identify as Black or African American, please ask your doctor about the new race-free approach to determine your level of kidney function. Join the conversation on social media during Black History Month by using the hashtag #blackhistorymonth.

In the United States, 37 million adults are estimated to have kidney disease, also known as chronic kidney disease (CKD)—and approximately 90 percent don’t know they have it.  1 in 3 adults in the U.S. are at risk for kidney disease. Risk factors for kidney disease include: diabetes, high blood pressure, heart disease, obesity,and family history. People of Black/African American, Hispanic/Latino, American Indian/Alaska Native, Asian American, or Native Hawaiian/Other Pacific Islander descent are at increased risk for developing the disease. Black/African American people are more than 3 times as likely as White people to have kidney failure. Hispanics/Latinos are 1.3 times more likely than non-Hispanics to have kidney failure.