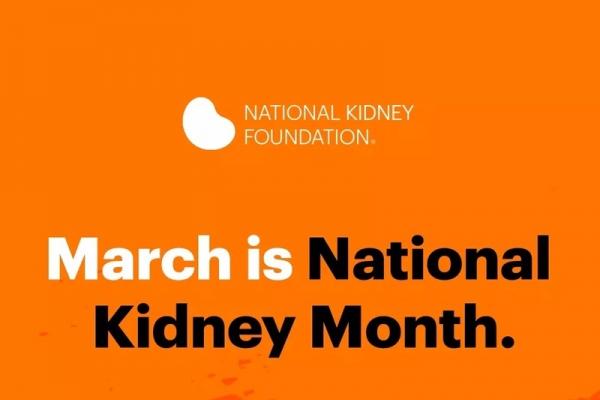 “Are You the 33%?®” Campaign Helps People Take Action

March 10, 2022, New York, NY — March is National Kidney Month, and the National Kidney Foundation (NKF) is marking the occasion by warning the public about persistent disparities in chronic kidney disease (CKD). The warning is part of an urgent call to action for all people, especially people in communities of color, to take a minute for their kidneys, know their risk factors and find out “Are You the 33%?”

Understanding the importance of early detection of kidney disease and all risk factors is the first step to successfully treating it," said Kevin Longino, CEO of NKF and a kidney transplant recipient. "Disparities are a huge problem, and the science is telling us loudly that not all risk is biological or genetic. Societal factors that influence health, such as poverty, education, food insecurity, and housing, result in all communities, especially communities of color, in worsened health outcome. In other words, your zip code can be a bigger factor than your genetic code in developing kidney disease."

Recognition of these social issues reflects a broader call by NKF to re-examine institutional policies and practices and to identify where structural racism affects risk for developing kidney disease and overall kidney healthcare. For example, NKF recently recommended the adoption of a new race-free equation to estimate kidney function (eGFR) because the current equation was contributing to the underdiagnosis and undertreatment of people who identify as Black or African American. Additionally, a study released last month in the American Journal of Kidney Diseases (AJKD), found Non-Hispanic African American or Black and Hispanic or Latino patients present with kidney failure at younger ages than White patients.

"The data has been persistent," Longino added. "Communities of color, particularly Hispanic or Latino and African American or Black people, face a disproportionate burden of kidney disease and kidney failure. It's another reason why it is absolutely critical people become aware of their risk. Our goal through the 'Are You the 33%?' campaign is to make it as quick and as easy as possible for people to get informed about their own kidney health."

“Are You the 33%?”  is a public awareness effort by NKF focusing on educating people about five major risk factors for kidney disease. Approximately 80 million people are currently at risk for kidney disease and NKF has developed a one-minute quiz at MinuteForYourKidneys.org to provide everyone with a fast and free way to gauge their personal risk. The quiz is available in both English and Spanish. You can also join the conversation on social media by using the hashtag #MinuteForYourKidneys

To learn more about kidney disease and how to maintain optimal kidney health visit www.kidney.org

In the United States, 37 million adults are estimated to have kidney disease, also known as chronic kidney disease(CKD)—and approximately 90 percent don’t know they have it.  1 in 3 adults in the U.S. are at risk for kidney disease.  Risk factors for kidney disease include: diabetes, high blood pressure, heart disease, obesity, and family history. People of Black/African American, Hispanic/Latino, American Indian/Alaska Native, Asian American, or Native Hawaiian/Other Pacific Islander descent are at increased risk for developing the disease. African American/Black people are more than 3 times likely than Whites to have kidney failure.  Hispanic/Latino people are 1.3 times more likely than non-Hispanic people to have kidney failure.

The National Kidney Foundation (NKF) is the largest, most comprehensive, and longstanding patient-centric organization dedicated to the awareness, prevention, and treatment of kidney disease in the U.S. For more information about NKF, visit www.kidney.org