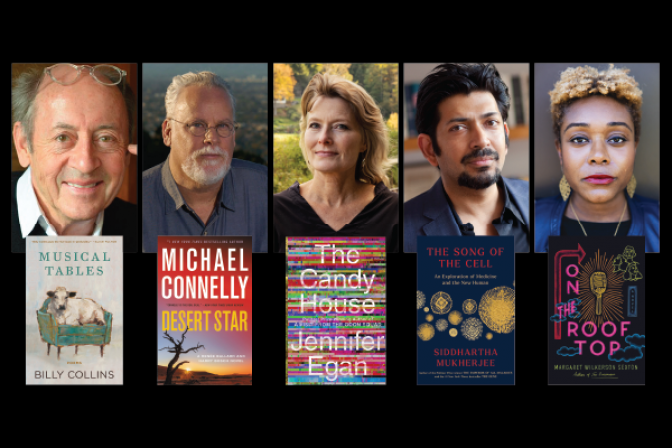 Are you ready to be dazzled by your favorite authors as they share insights from their newest novels underneath the sparkling chandeliers of San Francisco's historic Palace Hotel? Join us in person or virtually at the literary event of the season that also raises money to find life-saving solutions to fight kidney disease–NKF’s 34th Annual Authors Luncheon kicks off Saturday 12, 2022.

Get your tickets or donate to celebrate your love of reading while supporting our efforts.

Margaret Wilkerson Sexton, an award-winning novelist, is back with another show-stopping novel. On the Rooftop follows the musical career of three sisters and their mother, Vivian, who dreams of musical stardom. Alternating between perspectives, Sexton explores themes of individuality, family dynamics, and community during the gentrification of San Francisco in the 1950s.

Our September pick takes the stage! #OnTheRooftop by @MWilkers13 centers around an incredibly talented group of singing sisters. Their mother dreams of fame for her daughters...but is that what they want for their own lives?

Get your copy here: https://t.co/teS4HQDrgD

“I love to explore the generational impact of white supremacy on Black communities so those aspects have certainly been included in this book but I wanted the readers’ overall experience to be joyful, even melodious. I wanted to comfort them with the balm of unconditional family ties that can act as a shield against the world,” said Margaret Wilkerson Sexton. “My grandmother and father were two of my biggest supporters, especially when it came to my writing. Unfortunately, they both also suffered from kidney disease. Though they've passed, I know it would have meant so much to them to see this book be associated with the National Kidney Foundation and a cause that they so cherished."

Reese Witherspoon calls On the Rooftop "an utterly original and brilliant story," and a New York Times Book Review hails Sexton as "a writer of uncommon nerve and talent."

Siddhartha Mukherjee is an assistant professor of medicine, a cancer physician, and one of the most influential medical writers to date. Previous novels landed Mukherjee a spot on Time's Top 100 Most Influential People for his ability to break down complex medical jargon in an accessible way. The Song of the Cell is no different. In this thrilling and informative read, you'll travel back to the discovery of cells, take a peek at our present understanding, and see exciting perspectives on the future.

Super excited that THE SONG OF THE CELL was chosen by Oprah (!!!!) for the 20 books for this fall. A big thanks …https://t.co/il6wGFuqtW

Oprah Daily says, "The Song of the Cell blends cutting-edge research, impeccable scholarship, intrepid reporting, and gorgeous prose into an encyclopedic study that reads like a literary page-turner."

From hard-hitting journalism to critically acclaimed short stories and novels, Jennifer Egan is an author who can do everything. Her latest book, The Candy House, a companion piece to the Pulitzer Prize-winning A Visit from the Goon Squad, shuttles readers to a future where memories can be stored, played back, and even traded–all at a cost, though. What will these characters give up to feel a little less alone? You'll have to read it to find out.

Annalisa Quinn of NPR calls The Candy House "a brilliant portrait of intersecting lives," and Alexander Moran of Booklist says it is a "wondrous, riotously inventive work of speculative fiction."

Michael Connelly is thrilling fans of the Harry Bosch universe with his latest novel, Desert Star. Hardboiled detective Bosch is back, and this time he's teaming up with a former detective, Renée Ballard, to catch a killer who has eluded him for years. Will they be able to set aside their differences and crack the case? Only time will tell.

Thrilled to share this ⭐️ review in ⁦@PublishersWkly⁩ for DESERT STAR!

“ranks up there with Connelly’s best.”

Publishers Weekly Starred Review calls Desert Star a novel that "ranks up there with Connelly's best." A Booklist Starred Review says, "longtime Bosch followers will be taking deep breaths after this one's superb finale, especially given its implications for the future."

Billy Collins, a prolific poet who served two terms as US Poet Laureate, is offering a new collection of short poems, Musical Chairs. Despite the short length of his poems, Collins once again paints vivid scenes of joy while exploring what it means to be a human. As always, you'll find the poems deep but interlaced with Collin's signature voice and humor.

Here's a small poem from Billy Collins' new poetry book "Musical Tables" which will be published on November 15. I enjoyed several poems in this book but this one lingered and became my favorite: pic.twitter.com/g5p71IUpwy

LitHub hails Musical Chairs as "one of the most anticipated books of 2022," and poet Alice Fulton says Collins "puts the 'fun' back in profundity."

See the authors in person or join virtually from the comfort of your favorite reading nook. All tickets come with at least one complimentary book and an autographed commemorative bookplate. Get your tickets before time runs out.


Tim, was an energetic, healthy 29-year-old sailor in the Navy when he suddenly collapsed and was rushed to the hospital. There, he received news that shocked him and t...

Meet the Grandma Fighting Kidney Disease on the Fortnite Battlefield


Picture a gamer: you might see a young teen with color-changing lights in the back. Maybe a college student playing with friends or even an adult who made a career fro...