The Impact of Unequal Care for LGBTQ+ Kidney Patients 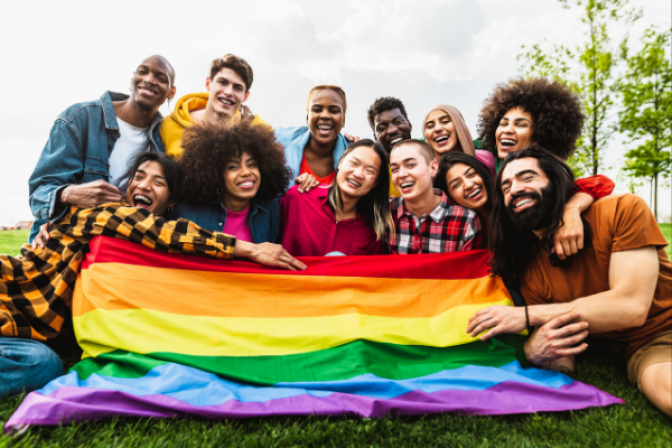 "Unless people with privilege are standing up and pushing back against those using their privilege for bad for bad purposes, these disparities are going to continue." –Brian Sims, PA Representative

Discrimination and harassment can get in the way of members of the LGBTQ+ community receiving medical care, which increases the risk of health problems. Dr. Dinushika Mohottige and Dr. Mitchell R. Lunn, two experts in sexual and gender minority health and the first openly gay elected state legislator in Pennsylvania history, Rep. Brian Sims, discuss this and more.

What are the LGBTQ+ communities?

Since the term "LGBT" first appeared in the late 1980s, the community has grown.

"While often in these conversations we talk about people that are lesbian, gay, bisexual, transgender, queer questioning, and intersex, our community is so much larger than that. People can finally discover their identity for themselves and identify who they are for themselves," said Sims. "We are gender nonconforming, gender non-binary, and two-spirit. We're so much more than just LGBTQ."

Find out more about this diverse community, get resources, or learn about allyship.

"As somebody who has worked in LGBTQ equality for a good portion of my life, [what has] always been abundantly clear to me is the disproportionate disparities in care across the LGBTQ spectrum," said Sims. "One of the big problems in LGBTQ advocacy is that far too many people believe that we are protected under the law where we are simply not protected."

Sims is not alone, and there are stats to back it up. Healthypeople.gov, a federally-run organization that monitors progress and creates benchmarks, reports:

Since the communities include people from all walks of life: every race, ethnicity, age, religion, socioeconomic status, and education level, some may experience more or less discrimination depending on their lived experience.

Learn more about the social determinants of health.

Avoided or turned away from medical care

In addition to facing unequal care, LGBTQ+ people can have trouble even getting through a healthcare provider's door. Unfortunately, it occurs more often than you may think.

The Center for American Progress (CAP), a nonpartisan policy institute, discovered that:

"These are not just remnants of the past," said Dr. Dinushika Mohottige. I can think of an example of a person trying to get dialysis treatment in their unit. [They were] told to go to the hospital because they are a trans person and the climate was truly hostile and transphobic."

Even if they aren't outright turned away, poor treatment encourages people to stay away from medical care unless necessary. A year before the CAP survey, eight percent of all LGBTQ+ and 22 percent of transgender individuals avoided medical care for this very reason.

Kidney disease is a "silent disease" because few people have symptoms until their kidneys fail. The best way to prevent or slow the progression of kidney disease is through frequent healthcare checkups and managing risk factors like diabetes and high blood pressure. Sadly, discrimination often gets in the way.

Are you at risk of developing kidney disease? Take this one-minute quiz to find out.

Even those with an unbiased provider often find themselves educating their provider. Why?

A 2011 survey found that healthcare education only provided 5 hours of training in LGBTQ+ subjects. Ten years later, a similar study saw this number increase by only 3 hours.

Dr. Lunn's experience aligned with this data. "As a medical student with a huge amount of privilege attending medical school at Stanford, my colleagues and I were really impressed on the fact that we were taught nothing about caring for LGBTQ people."

Since there is a lack of medical education, not all providers may be aware of treatment options or complications.

Sims, who went through a kidney transplant at a facility in one of the top ten cities in America, experienced a practitioner's lack of medical education firsthand. "I still had to explain to people what [HIV] PrEP was. There are many things like that really do require LGBTQ people to really have to be very forward with who we are and our care."

The impact of discrimination

For many, the discrimination doesn't end at their doctor's office; It can occur at home, at work, at school, and in public spaces like parks and grocery stores. From glares to staring to outright physical violence, living in a world that doesn't accept you is incredibly difficult and has a real impact.

If you, a friend, or a loved one is struggling with their mental health, it's important to remember that you are not alone and that help is available.

Here is a list of LGBTQ+-friendly helplines staffed by trained professionals.

How to provide inclusive care

So, where do we go from here? It's simpler than you may think. Everyone wants to be valued and appreciated for who they are. So, in a healthcare setting or not, creating policies that provide safety and affirm peoples' identities is a great place to start.

It's also important to remember that no one is perfect, and you'll likely make mistakes. If you do, apologize, learn from it, and move on.

Learn more about the advocacy NKF is doing or get involved.