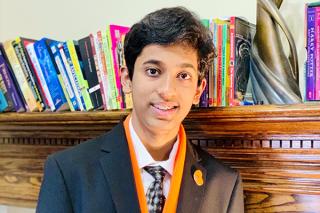 Kidney disease took from him, and Kapil answered by giving.

His beloved grandmother, Shantimayee Acharya, had received a sudden diagnosis of chronic kidney disease, which had already damaged 80% of her kidneys. This happened before Kapil was born—"…you can say I was kind of born into this.” Kapil didn’t know much about kidney disease, but did know that it had become a “family illness,” affecting all members.

This was particularly the case with Shantimayee, a mainstay of both her family and community. Shantimayee was not your average stay-at-home grandmother, but an exceptional person, a great example and source of strength to Kapil. After balancing the raising of three good children and having a successful career, she had just taken early retirement and, with her husband, was planning a world tour vacation, a dream cut short by kidney disease. Importantly, Kapil notes, like so many others, she was so busy with her family that she neglected to get regular health checkups.

As a young child, Kapil was very close to his grandmother. The years with this disease were an ordeal for both herself and the family, as she battled her illness, going to dialysis treatments and being frequently hospitalized. She eventually lost the battle with her illness. “…with that I lost forever some beautiful moments that I could have spent with her,” says Kapil. To watch this wonderful person taken from him, to watch her suffering and its effects on the family, was an outrage to Kapil. But he reacted in a positive way.

A student at Newman Smith High School in Carollton, TX, Kapil is a drummer and basketball player, and may seem a regular guy—but not so. Kapil decided to take on kidney disease itself. First, by volunteering at Kidney Walks and camps and raising funds. Then in a remarkable pivot, he decided to turn the tables on the “author of his pain,” and became an author himself, writing a book—with the proceeds going to the National Kidney Foundation to fight kidney disease! His grandmother would have been proud.

He became even more determined to take on this illness. Kapil became an NKF Kidney Advocate, testifying in the Texas Senate on the devastating impact of this disease on families, and the need for more research funding. “There are many ways support can be extended to families be it in providing insurance, removing barriers to home dialysis or even providing funds for specific research,” says Kapil.

As a member of the Asian-American Pacific Islander (AAPI) community, Kapil also focuses on the disproportionate impact of kidney disease on this population. “Diabetes and high blood pressure [are] becoming a common issue in Asian Americans, and thereby increases the risk of CKD…. awareness of kidney disease and advocating regular tests are crucial for this community.”

Most of all, however, what continues to motivate him is his concern about the effect kidney disease has on families: “…it was an experience that only could be felt but not expressed. She died a painful death, and my grandfather and mother went through a mental turmoil which took quite some time to heal. All this had a cascading effect on me…I had no idea of kidney ailments other than the fact that diseases such as these not only affect the patient but also had a lasting impact on the families.”

“From supporting the patients during dialysis, providing financial and emotional support to even donating kidneys, families go through a lot,” says Kapil.

Kidney disease affects millions of patients and family members, like Kapil’s, across the country. Early detection is key. You can protect your family by encouraging them to take the Kidney Risk Quiz at minuteforyourkidneys.org - and while you’re at it, take the quiz yourself!