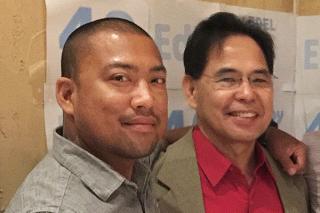 Where to begin? There are so many elements of Lex David’s 39 years on this planet that are worth talking about it is hard to know where to start. He is a musician who plays at least half a dozen instruments. He surfs. He plays competitive volleyball. He is a husband and father of two young children, and they live in Orange County, CA. He is the director of sales at Sonix. He’s the type of guy who says things like “life is too short” and he means it. Basically, he tackles life.

Lex David is also a transplant recipient. He was just 20 years old when his kidneys suddenly failed for no apparent reason, though because he is of Pacific Island descendant, he was at increased risk. Barely out of his teens, he was thrust into three-times-a-week hemodialysis. He held down a job during the hours he wasn’t at the dialysis center. At night, he would head to the recording studio to lay down tracks with his R&B group.
“I said to myself: ‘I can’t keep doing this. I have things to do’,” Lex says. So, he switched to peritoneal dialysis, which he did at home.
But after two years of the grueling regiment, his dad, couldn’t take it anymore and offered to donate a kidney to Lex. Fortunately, he was a perfect match and the kidney still functions well today. Lex says leading up to the transplant, he had a bit of a tough relationship with his father, Stan. After the transplant, their relationship got much better and brought them together despite their differences. His dad’s health is great today, too, Lex said.
“I guess going through something like that brings you closer,” he says.
“As it turns out, and for so many reasons, kidney failure has been more of a blessing than a curse,” Lex says. He appreciates life and knows it can end in a second without warning, which forms his thinking in a positive way today.
Several months ago, Lex decided he needed to do more and committed himself to raise awareness about kidney disease and failure. He had been working at Sonix for many years when he approached the leadership with his idea to use the company to promote kidney health and kidney disease awareness.
“They said ‘Hey, that’s great, but to be honest with you, this isn’t the coolest charity out there’,” Lex says. “I decided I was going to make it cool because I think it is cool.” He put together a proposal and the company ran with it. They created a phone ring engraved with the words: “Heart Your Kidneys,” and “Supporting National Kidney Foundation.” Twenty percent of sales of the phone accessory goes to NKF as a donation.
The phone ring can be affixed to the back of a cell phone or case and helps the user keep their grip and utilize it as a stand. Sonix also devoted the back of the package with a message from NKF about important statistics every American adult should know. One in 3 American adults are at risk of developing chronic kidney disease (CKD) and an estimated 37 million American adults have CKD, though most don’t know it.
Kidney disease can progress to kidney failure that requires debilitating dialysis or a kidney transplant in order to live. More than 726,000 Americans have irreversible kidney failure today and about 100,000 Americans are on the waitlist for a kidney transplant. Those on the kidney transplant list can wait for up to seven years for a kidney. Tragically, 12 Americans die every day waiting for a kidney transplant.NKF is working to dramatically increase the number of kidney donations from living donors so we can eliminate the need for a waitlist and make it possible that all patients who want a transplant can get one.
Now, Lex is out there promoting the sales of the Sonix phone ring and the work at NKF. He has become involved in other ways as well, especially with the national office and the NKF office in Hawaii. He is as devoted to this cause as he is to everything else he does in his life.
Please consider becoming a living donor. Take the first step by going to www.kidney.org/livingdonation.
To purchase the Sonix phone ring visit their site.