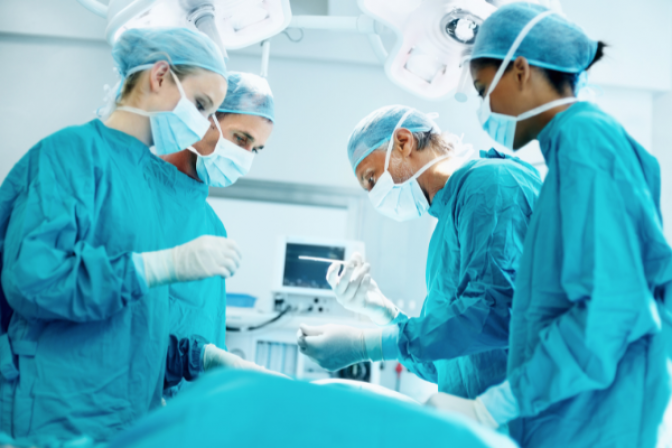 We dedicate this to the Parson Family, who made the selfless decision to delay their grieving and allow the doctors at the University of Alabama to maintain Jim Parsons' body functioning on a ventilator so this scientific and medical breakthrough could be possible.

Science has come a long way in extending life for kidney patients. Is transplantation between humans and animals the next step? In this episode of Hot Topics, Jayme Locke, MD, MPH, the lead doctor and surgeon behind the first successful transplant of a human receiving a pig kidney, answers this question and more.

If you were to picture a kidney transplant, you'd probably imagine one person donating their kidney to another. This is known as allotransplantation or transplantation within the same species.

Xenotransplantation is the same concept, however, it uses an organ from one species and transfers it to another. In this case, researchers are transplanting a pig's kidney into a human.

Why we need xenotransplantation

There are 37 million Americans with chronic kidney disease, 660,000 people living with kidney failure, and 100,000 people on the transplant list.

Unfortunately, there are not enough organs available for everyone.

"We have an organ shortage, not just in the U.S., but in the world." said Dr. Locke, "It's sort of an unmitigated crisis, and it's really challenging for me as a transplant surgeon…to know that even those individuals on the waitlist are going to really struggle to find an organ."

Sadly, many people looking for a kidney don’t know they are at risk until it’s too late.  The best way to avoid this is through early detection and controlling risk factors like diabetes and high blood pressure.

Start by taking this one-minute quiz to determine if you are at risk. Then take these results to your healthcare provider to get your kidney health conversation started.

The internal structure of a pig kidney is extremely similar to humans.1 Dr. Locke explained they:

With the potential of the pig kidney identified, Dr. Locke started working to make sure the transplant worked in a living person. "This is the result of 30 years worth of work and certainly not all my work. I'm the person who's trying to figure out how to make it work in a living person. It's a testament to our scientists who have been at this for a very long time, and I hope this gives people hope and knowledge that they are not forgotten."

Even in human-to-human transplants, doctors perform compatibility tests to lower the risk of rejection. After the surgery, recipients take immunosuppressants to protect the new kidney from their immune system.

So, if the body attacks another human's kidney, imagine how it would react to a pig's kidney: It would immediately reject it.

How did the team overcome this barrier? They created the UKidney™, a genetically modified pig kidney designed to work in humans. A lab removed three genes from the pig DNA, one being the growth hormone receptor which would have caused the kidney to outgrow the human body, and added six human genes to help regulate the immune and blood clotting system.

While the changes made to the pig kidney seemed scientifically sound in theory, there is only one way to determine if it would work in the human body–  performing a transplant.

Due to the inherent risk of a new procedure, researchers wanted to first perform the xenotransplant on an individual who had been declared brain dead and could not donate their organs for transplantation. That’s when Jim Parson was identified and, with his family on board, the surgery was scheduled.

"I think you could have heard a pin drop in the room. We didn't want it to not work." said Dr. Locke, "When we took the clamps off and restored blood flow–that kidney turned pink, and it stayed pink. Then 20 minutes later, it made urine. I don't even know how to characterize it, but it was just remarkable."

After 77 hours, the study succeeded; the kidney worked the whole time despite the complications of brain death, like fluctuating blood pressure.

This was a huge step in the right direction, however, it may be a while before you see pig kidneys xenotransplanted into humans. The team proved their preclinical trial model but moving to a living human clinical trial requires U.S. Food and Drug Administration approval to use genetically modified pig kidneys in humans. Afterward, the clinical trial proposal will need to pass the UAB’s Institutional Review Board for Human Use review.

“We anticipate getting additional guidance from the FDA about what they think is appropriate soon,” Dr. Locke said. “It is quite possible that they may want us to do additional studies in the human brain-dead model. We plan to move this model forward, and look to perform additional transplants in this model to continue to collect and compile data to make the case that we are ready to do this in living people.”

As they move forward, however, they'll never forget the sacrifice of the Parson family, who made this possible.

"I do want to make sure I thank the Parsons family; we have named this the Parsons model in his honor." said Dr. Locke, "I think their gift is truly extraordinary and has really helped us advance the field in a meaningful way, and I think is going to help us make a difference in hundreds of thousands of people's lives to the patients out there."

Learn more about the xenotransplantation study.

Looking for the latest in kidney research, care, and treatment?

Join us as we highlight the latest in kidney research, dispel myths, bring you up-to-date news in kidney care, and answer questions from patients to help them live well with kidney disease or a transplant. Subscribe to Hot Topics in Kidney Health.