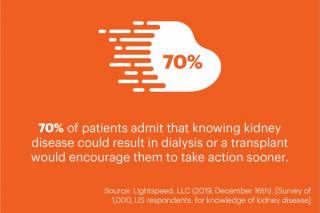 Survey shows that patients want doctors to tell them how to prevent kidney disease
January 2, 2019, New York, NY- Just in time for 2020’s New Year’s resolutions, a fresh survey commissioned by the National Kidney Foundation shows that patients with at least one of the five risk factors of kidney disease want more information and are willing to make behavioral changes when they know what to do.
The survey conducted in December by Kantar, a global data, insight and consulting company, and asked American adults about their knowledge of kidney disease and the five risk factors (diabetes, high blood pressure, heart disease, obesity or family history of kidney disease) which can lead to the illness. It found that Americans in general are not talking to their doctors much about kidney disease, though most respondents who had at least one of the factors did know about the elevated risk.
“We must increase our efforts to get the word out to all Americans, primary care physicians, and policy makers that people need to know more about kidney disease and why,” said Kevin Longino, CEO, National Kidney Foundation and a kidney transplant patient. “Millions of Americans are counting on us to raise the level of discussion in the doctor’s offices and around the kitchen table.”
The survey found that respondents were more apt to change their behaviors once educated about kidney disease and the severity; knowing that kidney disease could lead to dialysis or a transplant encouraged patients to take action sooner rather than later; two-thirds of patients who learned of this plan to visit their doctor within three months; and more than half plan to change their behavior.
The poll found that:
Further, the majority of the responders, 59 percent, also said they wanted their doctors to give them direction on how to prevent kidney disease. While 61 percent of men are particularly interested in education about their risk factors and support in managing kidney disease.
Unfortunately, 1 out of 3 respondents (34 percent) said they have never spoken to their doctor about kidney disease and only 18 percent said they had a recent conversation with a doctor about kidney disease. Women (42 percent) were more likely than men (25 percent) to have never had a conversation with a doctor about kidney disease.
Not surprisingly, younger respondents, 35-44 years old, were less likely to speak to their doctors about kidney disease, though they are more likely than older responders to change to healthier behaviors, the survey showed.
In the United States, 37 million adults are estimated to have  kidney disease—and most aren’t aware of it.  1 in 3 American adults are at risk for kidney disease.
This survey, conducted for National Kidney Foundation, was made possible through a collaboration with Otsuka America Pharmaceutical, Inc.
Methodology
Kantar conducted a survey online in the United States from December 6-10, 2019 among the general population ages 30-59. Results reflect US Census for ages 30-59 against age, gender, region, household income, education, employment and marital status.
Kidney Disease Facts
In the United States, 37 million adults are estimated to have chronic kidney disease—and most aren’t aware of it.  1 in 3 American adults are at risk for chronic kidney disease.  Risk factors for kidney disease include diabetes, high blood pressure, heart disease, obesity and family history.  People of African American, Hispanic, Native American, Asian or Pacific Islander descent are at increased risk for developing the disease.  African Americans are 3 times more likely than Whites, and Hispanics are nearly 1.5 times more likely than non-Hispanics to develop end stage renal disease (kidney failure).
The National Kidney Foundation (NKF) is the largest, most comprehensive, and longstanding patient-centric organization dedicated to the awareness, prevention, and treatment of kidney disease in the U.S. For more information about NKF, visit www.kidney.org
#####