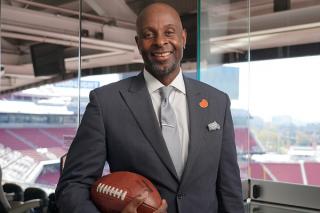 New TV Public Service Announcements Launch in March for National Kidney Month and World Kidney Day
Friday, March 1, 2019 – New York, NY— Football legend Jerry Rice and the National Kidney Foundation (NKF) have rejoined forces to focus on kidney health for all of March - National Kidney Month, which starts today and includes World Kidney Day to come on March 14.
Rice, a Pro Football Hall of Famer who earned three Super Bowl rings playing as a wide receiver for 20 years in the NFL, is featured in two, new 30-second NKF television public service announcements (PSAs).  The PSAs titled Kidney Stats and Invincible, will be broadcast nationwide and across NKF’s social media platforms to promote kidney health and kidney disease prevention throughout March and will continue airing throughout the next year.
Rice is participating as part of NKF’s continuing and growing Heart Your Kidneys (#HeartYourKidneys) public campaign to help elevate awareness of the kidneys to the status of other vital organs such as the heart. Most people know very little about their kidneys, including that the kidneys are located in the lower back below the ribcage – or that each person has two. Rice hopes the new PSAs will help change that, because, for him, this cause is personal.
“My brother Tom has CKD,” Rice said. “I’ve watched him go to dialysis three days a week for years, which is really hard on the body. He’s a very positive individual. Still, sometimes I spend the long hours that he endures just sitting by his side. It was my brother, after all, who loved, encouraged and pushed me early on by telling me that I had to make it to the NFL.”
On World Kidney Day, March 14, landmarks and buildings nationwide will turn orange, the signature color for kidney disease. NKF and Rice urge anyone with diabetes, hypertension, or a family history of kidney disease to speak with their doctor and ask about taking the two simple tests to check their kidney health. Even if a person inherits kidney disease, they may be able to slow its progression with lifestyle changes. Join the conversation. Help raise awareness on social media by looking for and posting #HeartYourKidneys.
“It’s important to me to keep working hard to get the word out with NKF, because you can see that this really hits home for me in more ways than one,” Rice said. “When your kidneys stop working, so do you! To stay alive, patients need dialysis, or they need a transplant, which provides a much better chance to live a longer and healthier life.”
Kidney Disease Facts
In the United States 30 million adults are estimated to have chronic kidney disease—and most aren’t aware of it.  1 in 3 American adults are at risk for chronic kidney disease.  Risk factors for kidney disease include diabetes, high blood pressure, heart disease, obesity and family history.  People of African American, Hispanic, Native American, Asian or Pacific Islander descent are at increased risk for developing the disease.  African Americans are 3 times more likely than Whites, and Hispanics are nearly 1.5 times more likely than non-Hispanics to develop end stage renal disease (kidney failure).
The National Kidney Foundation (NKF) is the largest, most comprehensive and longstanding organization dedicated to the awareness, prevention and treatment of kidney disease.  For more information about the NKF visit www.kidney.org.