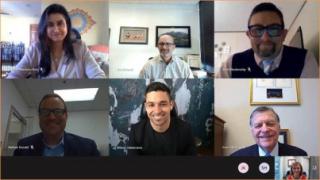 On March 2nd, more than 230 advocates from 43 states representing the National Kidney Foundation and five other kidney organizations met virtually with 243 legislators and their health policy staff. Their stories and experiences have already had an impact as legislators have begun to declare their support for the priorities of the kidney community. We also thank the hundreds of people who wrote to Congress in support of their fellow kidney advocates, telling Congress in one voice that kidney health policy needs reform!

Advocates also had the opportunity to hear from Debbie Allen during that evening’s Congressional Awards Reception, an American entertainment icon who recently joined NKF as celebrity spokesperson and who addressed the need for greater awareness and education about kidney disease, through initiatives like NKF’s 33% campaign. Following her comments, we recognized two kidney policy champions, Senator Bill Cassidy (R-LA) and Rep. Donald Payne (D-NJ), with NKF’s Congressional Award.

Senator Cassidy most recently served as one of four champions who introduced and led congressional efforts to pass the Comprehensive Immunosuppressive Drug Coverage for Kidney Transplant Patients Act. Representative Payne, a fellow kidney patient who is currently on dialysis and the kidney transplant waitlist, has been a champion for kidney patients through support for our efforts in the House and mustering awareness about kidney disease among fellow African American Members of Congress.

Reception attendees also had the opportunity to hear from the winner of this year’s Salick Award, Armand Halter. A patient-advocate from Connecticut, Armand has led NKF’s efforts to pass a state version of the Living Donor Protection Act (HB 6387), including testifying on February 11th. He has also been a mentor to fellow advocates and helped organize Connecticut advocates in their efforts to pass bills and raise awareness in the state legislature.

To watch video from the Congressional Reception, including from our Salick Award winner or to learn more about this annual event please visit our website and follow @nkf_advocacy on Twitter.

Hear from two of our advocates: