Kidney Health is Going to Hollywood 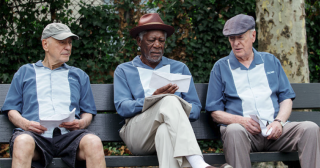 Grab a seat and bag of popcorn: Kidney Health and organ donation are getting the attention they deserve in a new movie with some of Hollywood’s biggest stars. Going In Style, from Warner Bros. Pictures, New Line Cinema and Village Roadshow Pictures, is a comedy about three lifelong friends—Willie (Morgan Freeman), Joe (Michael Caine) and Al (Alan Arkin)—who decide to plan a heist on the bank that absconded with their pension money. All the while, Willie finds himself in a desperate situation as a kidney patient undergoing dialysis when he learns that he must find a kidney donor.
The National Kidney Foundation is excited to partner with Warner Bros. to promote the release of the movie, and the timing couldn’t be more perfect. April is National Donate Life Month and Going In Style, directed by Zach Braff and written by Theodore Melfi, opens nationwide April 7. With nearly 100,000 Americans on the wait list for a kidney transplant, organ donation is vital to our mission. This year, only about 18,000 people will receive a kidney; one-third of which will come from living donors. Considering these statistics, we couldn’t be happier that Hollywood is bringing the conversation about kidney health and organ donation to the forefront.
The story of Morgan Freeman’s character, a kidney patient on dialysis who keeps his struggle a secret from his family and friends, is all too familiar for many of the 37 million Americans suffering from kidney disease. Through the power of great Hollywood writing and a stellar cast of actors including Michael Caine, Alan Arkin, Ann-Margret, Joey King, Matt Dillon and Christopher Lloyd, Going In Style helps convey that story while highlighting the need for living organ donation – the most selfless act a person can do for a friend, family member, or stranger.
Just like in the movie, often the hardest part for someone with kidney failure is asking a loved one or friend to consider getting tested to become a donor. To help promote the conversation about living donation, director Zach Braff is lending his voice to a PSA for National Kidney Foundation featuring our “The Big Ask, The Big Give” program. The Big Ask, The Big Give is a multi-media public awareness campaign which promotes awareness of living kidney donation for both the kidney patients who have difficulty asking someone to consider a kidney donation (The Big Ask) and potential donors (The Big Give). It’s free for patients and professionals, and the program provides factual, unbiased information addressing common concerns and offers support in making a decision about living kidney donation. The PSA, started airing in theaters nationwide on March 31.
Watch:
The PSAs call attention to kidney.org/livingdonation and invite movie goers to donate by texting “GiveinStyle” to 41444.
For kidney disease and organ donation to be part of a major motion picture, starring some of the most revered movie stars in Hollywood, is a major milestone in promoting kidney health awareness. We hope you join us in celebrating National Donate Life Month by checking out Going In Style on April 7. See you at the movies!