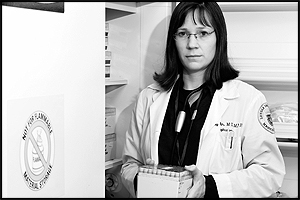 The terrible pain of kidney stone disease may be more common in people with metabolic syndrome -- a cluster of five traits that also sets the stage for heart disease and stroke, according to new research.

In fact, the prevalence of kidney stone disease was tripled among individuals who had all five traits of metabolic syndrome in a study published this month in the American Journal of Kidney Diseases, the official publication of the National Kidney Foundation.

But because being overweight or obese is one of the central elements of metabolic syndrome, these findings suggest that maintaining a healthy weight may lower one's risk for kidney stones or keep them from coming back.

"Kidney stones can present as excruciating pain in the flank or abdomen that often travels into the groin area, and is associated with nausea and vomiting," says Joseph Vassalotti, MD, National Kidney Foundation Chief Medical Officer. Finding risk factors for kidney stones that can be modified is important, not only to potentially avoid future bouts of pain, but also to prevent other serious conditions, he added.

Kidney stones "can be the first tangible symptom of associated silent killers such as diabetes and hypertension," says the study's co-author, Holly Kramer, MD.

Dr. Kramer and the co-investigators explain that the rate of kidney stone disease has risen over the last two decades in parallel with the obesity epidemic. Obesity is a major component of metabolic syndrome, along with high blood pressure, elevated blood sugar and unhealthy cholesterol levels.

With their suspicions raised that kidney stone disease and metabolic syndrome may be related, the study's authors analyzed data from a cross-sectional survey of American adults to test their theory. Nearly 15,000 individuals who participated in the Third National Health and Nutrition Examination Survey were asked, "Have you ever had a kidney stone?"

Subjects were also tested for each of the five individual traits that make up metabolic syndrome, including:

Almost one person in twenty reported a history of kidney stones (4.7%). The proportion of people with kidney stone disease grew along with the number of metabolic syndrome traits, from 3% with zero traits, to 7.5% with three traits and 9.8% with all five traits.

When they took into account other factors that would affect risk, such as age and gender, the researchers estimated that individuals with four or five traits were twice as likely to have kidney stone disease as those without the syndrome.

Their data did not pinpoint any one trait that caused kidney disease. Still, Dr. Kramer says, "There is evidence that losing weight can decrease blood pressure." She has also had patients who could stop taking drugs for diabetes after substantial weight loss and behavioral modification.

"This would suggest that weight loss might decrease your risk of kidney stones," she concluded.