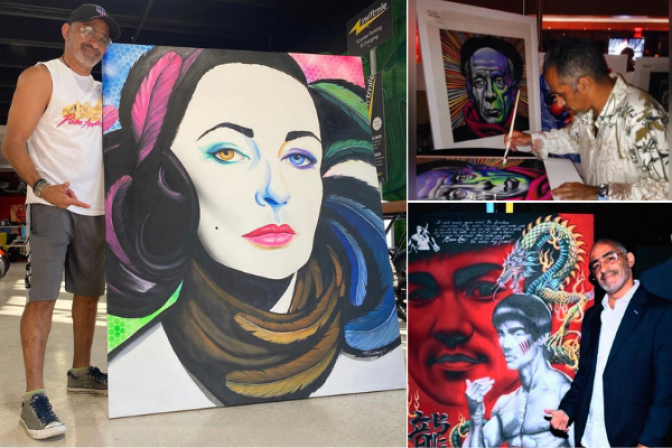 Marcus Suarez is a legendary artist known for his eclectic paintings and murals. In the 90s, his unique style catapulted him into the spotlight, allowing him to work for some of the biggest stars like Prince, Pamela Anderson, and Steven Spielberg.

At the height of his career, a series of strokes and a kidney transplant led Suarez away from the limelight, but he never put his paintbrush down or gave up on his dreams. Now he's celebrating his recovery by giving back to organizations that made it possible.

Crypto philanthropy in the fight against kidney disease

Suarez is joining a wave of forward-thinking artists breaking ground in nonprofit fundraising through crypto philanthropy, using cryptocurrency to raise money for nonprofits. How? He is releasing "The Idols Collection", a series of 140 portrait paintings, as non-fungible tokens (NFTs), with a portion of the proceeds going to the National Kidney Foundation.

There are 140 NFTs available derived from the original paintings of those who inspired Suarez to pursue his artistic career. A few of the incredible portraits include Betty Davis, Salvatore Dali, Prince, Picasso, and Frank Sinatra.

According to The National Council of Nonprofits, cryptocurrencies and the U.S. dollar are "fungible," meaning they can be exchanged for other things of the same kind.

For example, if someone spent $1000 on Bitcoin and donated it to a nonprofit, the nonprofit could sell it and gain $1000 in U.S. dollars.

NFT are unique and cannot be exchanged with the exact thing because there is nothing else like it! NFTs, give you a certificate of authenticity and ownership over the digital file.

In this case, the artist sells the NFT for U.S. dollars and donates the profits to an organization.

Suarez's talent was recognized early and fostered by his father and grandfather, both talented artists themselves.

"I started with a crayon in my hand, like everybody else," said Suarez, "but I never stopped."

With their support, Suarez was accepted and attended two schools for the arts and was even awarded a scholarship to a prestigious art college in New York.

In 1980, Suarez turned down the scholarship, opting to start his career. He sold t-shirts at flea markets to support himself and entered the exploding Graffiti scene in New York City. His quirky, colorful style soon caught the attention of nightclub and restaurant owners around town, who asked him to paint murals in their buildings.

Suarez's dynamic displays fascinated celebrities and other famous artists visiting the establishments, launching Suarez into the next phase of his career. For the next 30 years, he worked on dozens of campaigns for some of the biggest celebrities like David LaChapelle, Mariah Carey, and Elton John.

While Suarez was making a name for himself, he was also diagnosed with diabetes, a major risk factor for kidney and cardiovascular disease.

Are you at risk of kidney disease? Find out now.

Suarez was diligent in keeping his blood sugar in check, even as he grew more popular and busier. Unfortunately, diabetes slowly damaged Suarez's heart and kidneys until he had the first of eight strokes from 2012 to 2013. The last stroke paralyzed Suarez's right side, costing him his speech and painting ability.

Then, in 2015 Suarez experienced another blow when he was diagnosed with kidney failure and had to start dialysis.

However, nothing could make him lose his determination.

"Painting was my therapy. I was always an artist, and even when I had strokes. Little by little, every day, I stabbed the canvas," said Suarez, "I started small movements and they got bigger and more steady and subsequently I'm painting well again. So [I will] definitely never give up."

Why Suarez is giving back to the kidney community

Suarez posted on social media about needing a kidney for two years while making progress in other aspects of his recovery. One day he got great news from an old friend he'd painted ten years earlier; a woman named Alisha Mandacina was interested in donating her kidney to Suarez.

Alisha was tested and learned one of her kidneys would be a good match for Suarez. Three months later, after successful surgery, Suarez started enjoying his second chance at life.

"The day I woke up from the surgery," said Suarez, "I immediately noticed a difference in my energy. Now I feel strong enough to start my career again and be in the public spotlight. Never give up. Every day, little by little, it will get better. I promise you."

Interested in becoming a kidney donor? We applaud you! Learn more here.

Yes! Bitcoin, Ethereum, and other cryptocurrency donations are among the most tax-efficient ways to support the National Kidney Foundation. Your contributions help provide people with kidney disease access to the care, treatment, and guidance to cope with their disease.

Learn how donating crypto can lower your taxes.