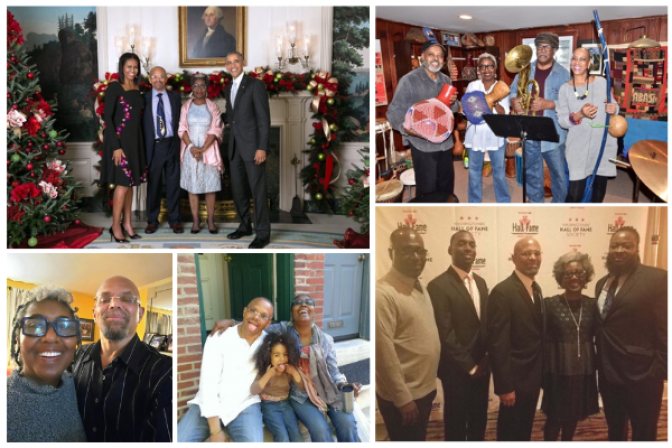 In 1984, Bernardine (Dine) Watson was feeling gloomy, exhausted, and suffering from intermittent joint pain. However, as a working mom going through a divorce, she attributed these feelings to stress. She had no idea that these symptoms would lead to a diagnosis of focal segmental glomerulosclerosis (FSGS) and change her life forever.

There aren't enough words to describe the powerhouse that is Dine Watson.

She is a researcher and writer focusing on social policy issues who has worked for major foundations and nonprofits. She is also a member of the D.C. Women Writers of Color, a poet, teacher, and a committee member on the Ward 4 Arts, Humanities, and Creative Economy Committee.

She's done all this and more while living with FSGS for 36 years.

After a routine checkup discovered protein in her urine, Dine saw a nephrologist (kidney doctor) and was diagnosed with FSGS. This rare disease harms the tiny filtering units inside the kidney where blood is cleaned.

For 15 years, Dine’s blood pressure and cholesterol readings stayed normal and her creatinine and proteinuria levels were stable. Although she experienced fatigue, she did everything in her power to live a normal, healthy, life. Dine raised a son, built a successful career, ate well, exercised regularly, and meditated to help manage stress.

Her nephrologist said the prognosis for avoiding kidney failure was good.

Then, in 1998, her doctor called with bad news: Her creatine levels were rising. She and her nephrologist spent the next two years waging a fierce battle against FSGS using:

Unfortunately, by 1999 it was apparent that Dine would need a transplant or dialysis within a year.

Dine hadn't shared her diagnosis with many. However, after getting very sick, she opened up to her sister, who immediately got tested to donate her kidney. Luckily, she was a perfect match, and the transplant took place in 2000. While the surgery was a success, the donated kidney didn’t last. Four short years later, Dine experienced kidney failure again and spent the next five years on dialysis.

Dine remarried in 2004 shortly before starting dialysis. Her husband Joe, wanted to donate his kidney after it failed but he wasn’t a match. Instead, he supported her throughout dialysis, where she did well, following the lifestyle recommendations.

Her determination paid off when a doctor recommended them to a kidney transplant exchange program that allows transplant recipient candidates to "swap" kidneys from their incompatible donors for ones from a compatible donor.

In 2009, the program accepted them. Dine's husband donated his kidney to a stranger, and she received a kidney from an altruistic donor in return.

Advocating for herself and others

Dine would most likely not have been accepted to the paired exchange program had she not made good lifestyle choices and advocated for herself. Unfortunately, kidneys are in short supply, and not everyone has the same ability to do so.

Health inequalities caused by social factors can make it more difficult for some people to get needed medical care due to where they live. For example, some may have limited access to medical options, health insurance, reliable transportation, or may not have a regular doctor who knows their medical history.

"That's a real problem, especially for the African-American community." said Dine, "They may not be as well connected to health and medical resources. And that is the basis for some of my advocacy in the kidney field because I think that often people don't get the help and support that they need."

Dine has since met her donor, Judy Payne. They quickly become fast friends and work together advocating for kidney donation and speaking with people who have kidney disease.

It's crucial to pay attention to your body.

"A lot of times," Dine said, "we get caught up in our daily lives and we're not really paying attention to the signals our body is giving us. Pay attention and get yourself checked out."

Kidney disease is a "silent killer" because few symptoms are present until the later stages. Since Dine received an early diagnosis, she was able to monitor the disease and make lifestyle adjustments to maintain her kidney function for a number of years. Had she not known about the FSGS, the kidney failure may have occurred sooner and been a complete surprise.

Periodic testing is the best way to catch kidney disease early and maintain kidney function for as long as possible. Start the conversation with your doctor by taking this one-minute quiz to help determine if you are at risk of developing kidney disease.