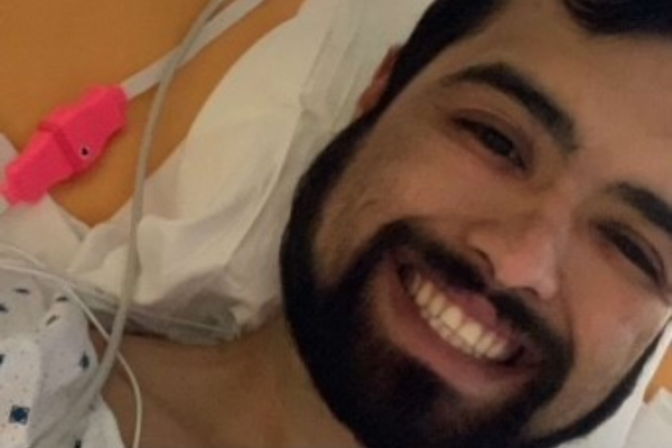 After graduating high school in 2015, Mario Silva joined the Marine Corps and began his career at a base in South Carolina, working as an administrator and performing military funerals. He fell into a rhythm and loved his job, but a short year later, Mario's commanding officer sent him to the sick bay for a routine annual physical that would change his life forever.

The doctors found that Mario's blood pressure was alarmingly high but decided to recheck it the next day to rule out anxiety as a cause. The next morning, it was just as high, so he was sent to the hospital for further testing.

"I didn't realize how serious it was because I didn't know anything about blood pressure, but I could see from their looks that it was a problem," Mario said. "They asked me, 'are you feeling okay?', 'do you have a headache?', and 'are you worried?' I felt normal and only worried because everyone else was."

At the hospital, healthcare professionals found protein in his urine and ordered a kidney biopsy to determine if Mario's kidneys were damaged.

"They told me that the sample they pulled from the kidney biopsy was nothing but scar tissue and my kidneys were failing. My kidneys were functioning at only 25%," said Mario. "They labeled it as chronic glomerulonephritis or nephrotic syndrome. I didn't need dialysis at that point but soon it was going to come to that. Then they started talking about getting on a kidney transplant list."

Mario wanted to be close to family and friends during this challenging transition, so he worked with his commanding officers to medically retire and returned home the day before Thanksgiving.

Starting dialysis and falling into denial

Up until Thanksgiving day, Mario had only experienced some minor swelling, but that day it was like a switch flipped. He couldn't eat, hold down liquids, and experienced painful abdominal cramps.

"After four days of being sick, I finally went to the emergency room,” Mario said. “I was lucky because my kidneys were functioning below 2% and my body was shutting down. If I'd waited any longer, I probably would have died."

"It was night and day after the first dialysis treatment. I couldn't believe it," Mario said. "It's a life-saving treatment. Looking back, I couldn't be more thankful for dialysis."

As time passed, Mario grew comfortable with his dialysis routine: he got up at 4 am, went to dialysis until 9 am, and continued with his day without acknowledging his medical condition.

"I probably would have gotten a transplant a lot sooner, but I fell into depression and denial for about two years," said Mario. "I didn't talk about my kidney problems with anybody. I wasn't staying very healthy. I didn't want to accept that there was something wrong. At that point, I stopped taking the VA's phone calls and I stopped keeping appointments."

It took time, reflection, and unwavering support from his family and now fiancé, Natalie Olivares, but Mario found the strength to acknowledge his kidney disease and begin working towards a kidney transplant again.

"The ultimate goal was to get a transplant. I realized if I keep doing this I'm never going to get it. So what am I doing? I'm not helping myself," Mario said. "I started making calls again and the transplant center embraced me with open arms."

Want to learn more about the transplant process? Sign up for our online, self-paced beginner's guide to kidney transplant. Get started today to gain the tools, resources, and confidence to begin your transplant journey.

Receiving a kidney transplant and opening-up

It took a year of testing for Mario's transplant listing to become active again, but after that, things moved quickly. On May 5th, 2022, early in the morning, Mario received a call that a kidney may be available for him, but it didn't end up being a match.

"When I got the first call it was 4:30 in the morning on the day I was moving in with Natalie. Then I spent all day moving, driving back and forth," Mario said. "At about 8:00 at night, I was just sitting there on my living room floor, tired, and I got another call from the Houston transport team. They said, 'We have a kidney now and it's serious.' I told my mom to get her stuff ready because it's real this time."

Mario and his mother drove to the airport and jumped on a private jet which took them to the transplant center. Within hours Mario had a new, functioning kidney.

"I know I can be stubborn, but I wasn't going to be stubborn with this. I'm not going to waste this opportunity. Anything my kidney care teams tell me to do, I'll do. I was only in the hospital for about a week, and then I was back at the hotel," Mario said. "After a month, everything was looking perfect, and I went back home. I've been back for testing since and everything's going really well. My quality of life is so much better– I sleep better, have a better appetite, and I have energy."

Once Mario began feeling better, he shared his story publicly for the first time in hopes of helping anyone else going through a similar situation.

"I wrote out my story on Facebook and asked anybody that ever has questions or feels scared about kidney disease, to reach out. I hope I can be the person I needed back then," said Mario. "That's the biggest thing I could take away from this journey– helping others. It was rough on me, but there were a lot of lessons that I learned along the way."

If you feel alone, confused, or want to talk to someone who understands what you are going through, join NKF Peers. We can match you with a mentor living well with kidney disease who can give you perspective, hope, and a sense of community.


Receiving a kidney from a friend or a loved one is wonderful and life-changing, but it can also be stressful. Many people experience a mixture of gratitude, anxiety, a...

Hot Topics: How Much Sodium Is Safe for Kidney Patients?


Many patients with kidney disease, including those on dialysis, need to limit the amount of sodium in their diets. But how much sodium is safe, and what are some ways ...