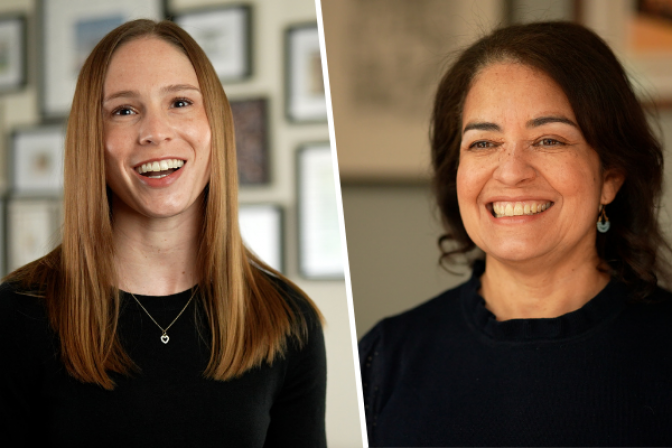 Receiving a kidney from a friend or a loved one is wonderful and life-changing, but it can also be stressful. Many people experience a mixture of gratitude, anxiety, and relief; Thankful for their donor, excited for a new life, yet not wanting to hurt their loved one or lose the donated kidney to rejection.

Your feelings surrounding your kidney transplant are all valid, but the broad range of emotions can be challenging to deal with. You don't have to deal with them alone. NKF Peers mentors are people who live with kidney disease and are here to help support and guide you.

Today we’re telling the stories of mentee Heather and mentor Christine, and how they've helped each other on their kidney health journeys.

Alarm bells rang in Heather's parent's minds when their six-year-old daughter was too sick to open her presents on Christmas morning. They brought her to the emergency room, where she was diagnosed with E.coli, Hemolytic Uremic Syndrome (HUS), and kidney failure.

She remained on dialysis for several months, preparing for a kidney transplant. Thankfully, her kidneys began to function again and she managed her kidney function with follow-up appointments and medications.

In Heather’s mid-twenties, her kidneys began to fail again, but her sister stepped up to donate her kidney and Heather was able to avoid dialysis.

"During this kind of year-long period where I was getting worked up for the transplant, I had a lot of trouble wrapping my mind around the transplant." said Heather, "I did have anxiety and worries and fears about this process."

Whether you need a kidney or are considering donating, NKF is here for you. Get help starting the conversation.

Christine Garcia Rubin is no stranger to living with kidney disease. She was first diagnosed with kidney failure in 1991, at age 22, and stayed on dialysis until her father donated his kidney to her later that year.

In 2006 her first transplant failed, but her sister volunteered to donate her kidney, which Christine has had for 15 years and counting. Christine's life was so changed by this experience that she immediately applied to become a mentor when she heard of NKF Peers in 2020.

"Becoming a Peer mentor at a National Kidney Foundation was so attractive because, while I did have a really great support system, I didn't have anyone who had been a transplant recipient before." said Christine, "I wish I had had that during my time."

Are you living well with kidney disease? Become an NKF Peers mentor. Your support can help change lives.

Seemingly different, the stories of Heather and Christine converged when the NKF Peers program connected them to each other. Using an anonymous app and knowing only each other's first names, they set a time to speak on a dedicated phone line. Realizing their stories were so similar, they felt an instant connection. Heather, like many people, experienced tension leading up to her transplant surgery but talking to someone who understood what she was going through helped.

"I didn't like to talk about my kidney disease until I met Christine via phone." Heather said, "I found it very easy to connect with her and instantly was relieved that I had someone who I could be my "true self" with about this kidney process."

Heather and Christine first spoke once a month but increased their meetings as the transplant grew closer and Heather's nervousness increased.

"There's a fear because the surgery for the donor is more difficult and riskier than it is for the recipient." said Christine, "So we talked about it. I told her, 'you have to realize that they're deciding to do this. They do it because they love you.'"

"I wanted to make sure my sister was okay, and she felt ready to do this. I wanted her surgery to go smoothly," said Heather, "Christine had a similar experience where she had family members be donors. So that was another area that we were able to connect with."

Become a mentee and get matched with a mentor.

Facing their fears, together

Post-transplant, Heather and Christine continue to chat about living with a transplant, medication schedules, side effects, and the complicated emotions of this new life.

"Being able to have that open dialog, I think, has been helpful for my physical and mental recovery." said Heather, "I can't wait to become a mentor myself when I'm feeling better."

Speaking with mentees has also helped Christine navigate her own kidney health.

"I think it [NKF Peers] is fundamental to my kidney journey," said Christine, "Being able to talk about the things that are happening to our bodies and mentally– all the things that we're dealing with, I just found that very attractive."

When you support NKF, you are helping people like Heather and Christine tackle their stress and live healthier, happier lives.