Home » A to Z » Genetics and Kidney Disease

Some diseases are said to run in the family, when more than one person in a family has the same kind of illness. And it’s true, some diseases and conditions, such as sickle cell anemia, that can affect multiple family members, are caused by gene variants (also known as mutations) and can be inherited (passed down from parent to child).

However, there are other diseases and conditions that appear to run in families but are not always caused by the variants in a person’s genes. Instead, environmental factors and individual choices such as dietary habits, pollutants, or a combination of genetic and environmental factors can be the reason why a disease develops.

There are some genetic variations in MYH9 and APOL1 genes that are linked to an increased risk of developing kidney disease, especially in under-resourced communities of color.1-4 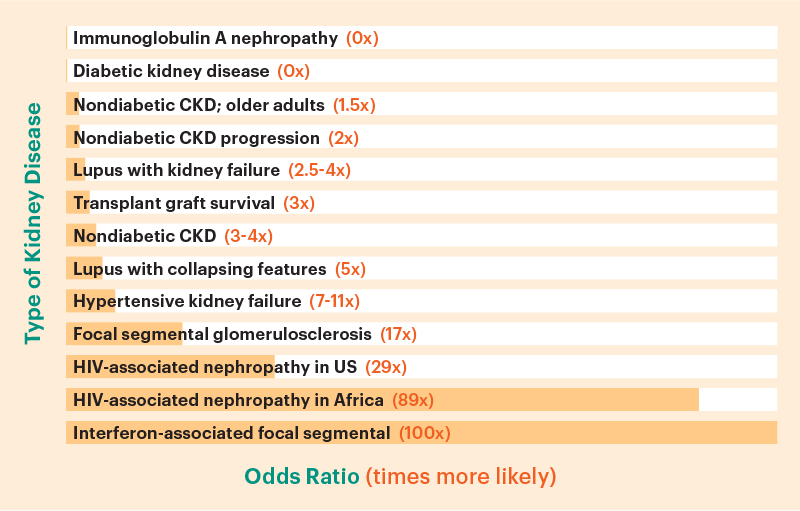 APOL1 risk variants also increased the incidence of focal segmental glomerulosclerosis (FSGS) by 17 times, HIV-associated nephropathy (kidney disease caused by HIV) by 29 to 89 times and nondiabetic kidney disease by 2 to 4 times, as well as increases in the development of other kidney diseases.

So why do people with certain genetic variants develop kidney disease?

We know that genetic variants are not solely responsible for the development of kidney disease. There are other factors that contribute to your kidney disease risk.

For many, the risk of developing kidney disease is not because of any one single reason, but due to a number of factors.

Environmental and social factors play a role in influencing and changing the way genes work. Some of the different types of factors include having more than one disease (for example, high blood pressure or diabetes), where you live, work, and play.

While all these factors present challenges and obstacles to good health, there are also individual decisions and personal choices, which contribute to an increased risk of developing kidney disease. Some of these personal decisions include choosing to smoke, not being physically active or exercising, eating unhealthy foods, ignoring your mental health, and other individual behaviors and choices you make in your everyday life.

The illustration below shows how genetic variants, when combined with other factors, can increase your risk of developing several types of kidney diseases. 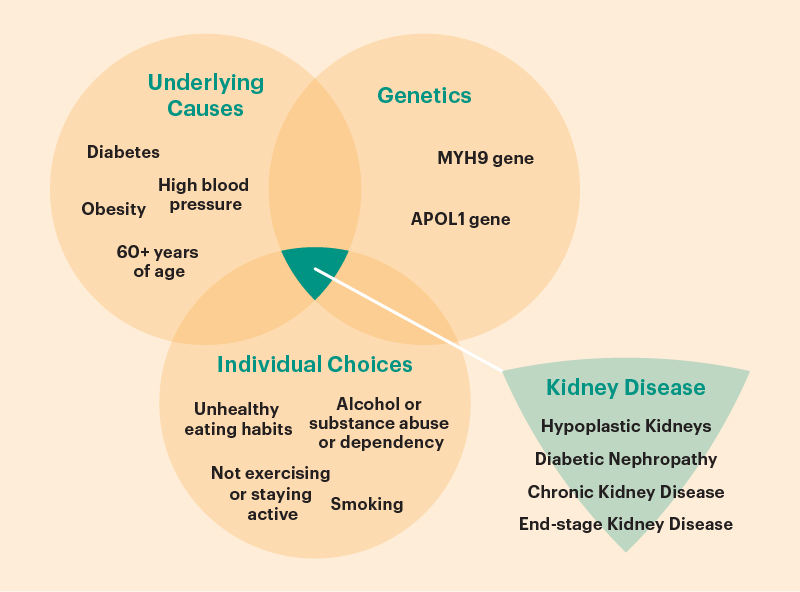