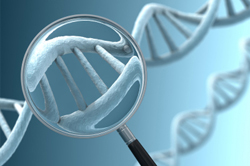 Doctors have long known that some families have more members with kidney disease than others. Studying the genes of families that have more kidney disease is just one of the research areas supported by the National Kidney Foundation. One recent research project looked at how genes affect the causes of kidney disease. “My grandfather had hypertension for 45 years,” reported Dr. Sun Woo Kang, a South Korean–born nephrologist and researcher. “My father has had diabetes and hypertension for 25 years. He also had heart bypass surgery. Then, it was recently discovered that I had certain precursors for cardiovascular or kidney disease similar to my father, and my father’s father. I became even more interested in human genetics as it relates to cardiovascular disease and kidney disease.” Dr Kang is working long hours in the laboratory at the Center for Human Genetics and Genomics at the University of California at San Diego.

Dr Kang’s research is funded with a National Kidney Foundation Fellowship. He is testing blood samples and DNA of patients with kidney failure, who volunteered because they were on dialysis at one of three Southern California medical centers. It is hoped this will help him discover if any genetic factors exist when it comes to cardiovascular and kidney disease. “Of people suffering from hypertension, there is a small group that is genetically at a high risk of developing hypertensive kidney disease,” he says. “I’m here to find out why and to help them.” That group, Dr. Kang adds, would get more intensive treatment, shown to reduce the onset of this disease.

Since kidney disease can affect some families more than others, Dr. Kang is one of many researchers who are looking for genes by collecting blood samples from people with CKD and their families. Then, they compare the genes in those with kidney disease to a group of individuals who do not have kidney disease. Understanding the causes of kidney disease could lead to new ways to treat these medical problems. In addition, knowing which people carry kidney disease genes will allow doctors to find people at risk earlier. If they know who is at risk for developing kidney disease, they may know who could benefit most from early treatment and more frequent doctor visits.

What should you do if you have a number of family members with diabetes, hypertension or other causes of kidney disease?

What can you do if you have a family history of kidney problems?

Family members of those with kidney disease should tell their doctors, so they can learn if they need to be screened for kidney disease. Experts say that if one member of a family has kidney failure, all blood relatives over the age of 18 should be tested for kidney problems.

Tell the doctor your family health history. It is especially important for the doctor to know:

Attend a kidney screening program sponsored by the National Kidney Foundation. Look for screenings in your area at www.kidney.org.

What can you do if you have a family history of heart problems?

What should you do if you know your family has an inherited kidney disease?

You should tell your doctor about your family history. Two rare types of kidney disease are known to be inherited:

Good news for families at risk was reported in 2010. A team of researchers from the United States and Europe found more than a dozen genes that may play a role in common forms of kidney disease. The team looked at the DNA sequences in more than 65,000 people. Common variations in several genes were found to be more common among people with chronic kidney disease than in those with normal kidney function. Researchers hope these results will explain how and why kidney disease clusters in some families.